Medicare for all remains the top health care plan in a new Insure.com survey of 1,500 people, though nearly as many people also back keep everything the same.

Here are the results for the fall 2020 survey: 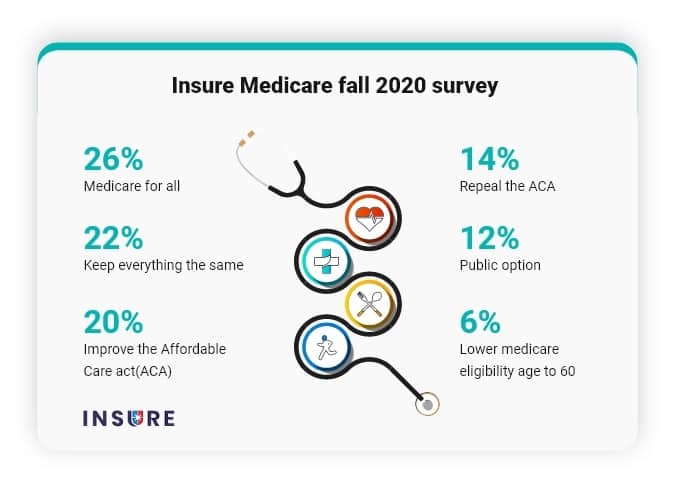 What that entails: Replace the current health insurance system with a single-payer system that would increase taxes, but cover all Americans and leave little to no co-pays and out-of-pocket costs.

What that entails: No health reforms. Instead, keep health insurance exactly the same.

What that entails: Keep the health law, also known as Obamacare, but find ways to improve it.

What that entails: Eliminate the health law, which among other things, created exchanges for individual insurance, implemented regulations to require plans to cover “essential benefits” and allowed states to expand Medicaid eligibility.

What that entails: Create a public insurance option for anyone to get a plan while maintaining the employer-sponsored private health insurance market.

What that entails: Democratic presidential nominee Joseph Biden released a plan earlier this year that would lower Medicare eligibility to 60.

The top two responses were also the top selections in two quarterly surveys earlier this year.

Insure.com has been tracking public opinion on health reform since spring 2019 in the lead up to the 2020 presidential election. We’ve found consistent support of Medicare for all. That health reform has had between 21% and 27% support over the five quarterly surveys.

Meanwhile, keep everything the same has increased in popularity since the first survey, when only 7% backed that idea.

What approach to health reform do you support?

Nearly all age groups chose Medicare for all as its top choice. The exceptions were:

Each geographic area chose Medicare for all. The only region that was close was the Midwest, which backed Medicare for all slightly more than no reforms. The most support for repealing the ACA was in the South, which ranked that as the third most popular option.

Montana, Washington, Connecticut and New York residents supported Medicare for all the most, while there was little to no support in North Dakota and Kentucky.

The third most popular choice was improving the Affordable Care Act (ACA). Nineteen percent supported strengthening the ACA. Virginians were more apt to back improving the ACA than other states.

While 20% wanted to reinforce the health law, 14% preferred repealing the ACA. That result is nearly identical to the four previous surveys. Though repealing the ACA came in fourth overall, Florida, Louisiana and North Carolina picked ending the health law as its number one reform, which was the same result as the summer survey.

One health reform that lost support since earlier surveys is a public insurance option. A public option would allow people to choose a public health insurance plan or stay on a private plan, such as an employer-sponsored health plan. In the fall 2019 survey, the public option was the top choice. That support has decreased each quarter and dropped to the fifth choice in the new survey — down to just 12%, which was the lowest percentage for the public option in any of the surveys.

We once again found little support for lowering the Medicare age eligibility to around 60. Supporters say the option is a way to get more people into Medicare without revamping the system through Medicare for all. However, only 6% of respondents chose lowering age eligibility as their preferred health reform — the same percentage as the previous two surveys.

Some of the survey results have fluctuated over the five quarters. However, we found that the COVID-19 crisis hasn’t changed most people’s minds about Medicare for all. Only 11% of those surveyed said the coronavirus crisis caused them to change their support for Medicare for all. That’s nearly identical to results from the same question in the previous two surveys.

Almost two-thirds (64%) said COVID-19 had not had them reassess Medicare for all. One-quarter said they weren’t sure.

We have found in our surveys that how you get health insurance may affect which health reform you want. Here’s the top reform choice by insurance coverage type:

We’ve found support change by type of insurance coverage over the quarters. For instance, employer-based insurance members backed a public option as their top health reform in the fall 2019 survey. Now, employer-sponsored members, who made up 59% of survey respondents, supported Medicare for all. Support for a public option among that group dropped by more than half since the fall 2019 survey.

Meanwhile, Medicare beneficiaries chose Medicare for all in the new survey with keep everything the same, finishing a close second.

However, people with an ACA or individual plan supported improving the ACA with Medicare for all coming in second.

Additionally, people without insurance were more likely to want to keep things the same or repeal the ACA than any other group in the survey.

That group also showed little interest in a public option, which mirrored previous surveys. This result indicates that people without health insurance are satisfied with not having coverage and aren’t looking for ways to get insurance.

Here’s how the break down has changed over the four surveys:

How would Medicare for all have impacted COVID-19 response?

“The answer to COVID-19 is decisive leadership based on science and the wisdom of public health experts,” said Deborah Gordon, a senior fellow at Harvard University  and author of “The Health Care Consumer’s Manifesto: How to Get the Most for Your Money.”

Skinner said Medicare for all wouldn’t have solved health care problems related to supply chains and protecting the health care workforce either.

“In the case of COVID-19, the problems seem to stem not from access or even cost problems in health care. They had more to do with preparedness, taking science seriously and the integrity of public health systems. Medicare for all might be a great way to go, but I don’t think you can point to COVID-19 as a clear illustration why,” Skinner said.

However, Gordon said Medicare for all could have led to a more coordinated response. Currently, the U.S. health system is a “patchwork between public programs” like Medicare, Medicaid and the Veterans Administration and private insurers and employers who self-insure.

That makes it difficult to “enact decisive policy changes and have them implemented consistently across the country,” said Gordon.