In most cases, a speeding ticket will increase your insurance rates, but exactly how much it goes up will vary depending on a number of factors, including which insurance company you use.

Among major carriers surveyed by Insure.com, Geico had the cheapest rate for those with a recent speeding violation.

“Every insurance company has a different rating system and matrix for violations and each type of violation will cause varying rate increases. In addition, if you fall into a less desirable tier (due to credit score and other factors) with your insurance company, a ticket on your record will probably cause your rates to go up more than someone who is in a preferred tier,” says Charlotte Burr, owner of AZInsuranceTeam in Tempe.

How much your insurance will go up after a speeding ticket also depends on how many other violations are on your record, how fast you were going, how your insurer surcharges for a speeding ticket and your state laws, among other factors. But in general expect your rates to increase 20% to 30%, on average, according to a rate analysis done by Insure.com. That’s about $280 to $430 extra a year.

Speeding ticket increases to your insurance: Rates by company

Geico has the lowest rate, on average, for drivers with a speeding violation, among carriers analyzed by Insure.com’s team of experts.

*Methodology: Insure.com commissioned Quadrant Information Services to field rates from six major insurers in 10 ZIP codes in each state for a full coverage policy for a 2017 Honda Accord for a male driver, age 40 with excellent credit.

You’ll see that while Nationwide had the lowest increase, it also has a more expensive base rate than the companies with the highest increases. That means, in some cases, you could still pay more in the long run by choosing a company with a low increase for violations.

“You could still pay more overall if you go with a company with low increases for tickets. Here’s why. The total amount you’re paying with a high base rate and smaller surcharge could be more than the total paid to a company with a low base rate and high surcharge,” says Penny Gusner, consumer analyst for Insure.com. “Also remember that your surcharge will diminish over time and be gone three to five years and you’ll be back at the base rate.”

This is how that works out when you look at the rate data. After a ticket, you’re paying $1,900 for the Nationwide policy, on average, but just $1,449 to Geico. So even though Nationwide’s increase for the ticket was lower than Geico’s, you’re still paying more in the end because Nationwide’s base coverage costs more.

How much does insurance go up after a speeding ticket in my state?

In addition to which insurance company you have, where you live also plays a role in determining the increase to your premium from a speeding ticket.

When it comes to speeding tickets, the Insure.com data show that North Carolina drivers pay the biggest penalty for a speeding ticket, with an average increase of 50 percent. California follows with drivers seeing a 43 percent increase. On the other end of the spectrum is Pennsylvania, where the jump is nine percent for the average driver.

These increases are based on one speeding ticket on your record for going 16 to 29 miles per hour over the limit, if you manage to get dinged twice in a three-year period for speeding (or any other ticket for that matter) there is a good chance your rates will be headed up dramatically. Insurers will often rate a repeat offender as a high-risk driver, which definitely results in higher rates. Insure.com data show that on average your rates will increase 43 percent if you have two speeding tickets on your record.

How far over the speed limit you are will also impact the increase, the faster you going, the larger the increase. At 30 mph over the limit, in Michigan, you will see a 70 percent rate increase and in Georgia the increase was 59 percent.

Here’s average car insurance increases for a speeding ticket for 16 to 29 miles per hour over the limit.

The cost of losing a safe-drive discount

On top of higher rates is the fact that you will lose any safe-driver discount that has been applied to your policy once a speeding ticket hits your record.

“The removal of a discount for not having a clean driving record results in a higher premium,” says John Espenschied with Insurance Brokers Group.

This example may make it clearer just how much of a difference a safe-driver discount lowers your premium.

Insure.com’s car insurance rates by state for 2018 ranking shows that the average price in California for a car insurance policy is $1,731 a year. A safe driver discount averages 25 percent, which is $433, lowering your premium to $1,298. If you get pulled over for ignoring the speed limit, that discount goes away and your premium goes up by 34 percent (the average increase in California), or $588, and now you are paying $2,319 for the next three years.

How long does a speeding ticket affect my insurance?

In most cases, you’ll pay a higher insurance rate for three to five years after a speeding violation.

DMV record is different than your insurance record

In the majority of states, your traffic violations and accidents are tracked using a point system. In most locations, these point systems vary. Additionally, insurance companies use their own point systems to calculate your premium.

If the Department of Motor Vehicles (DMV) in your state uses a point system (not all states do) any time you receive a ticket for speeding or other driving infractions the points associated with that ticket will hit your DMV record. If you accumulate a specific amount of points (it varies by state) your license will often be suspended or revoked.

Points vary by the severity of the infraction, while a speeding ticket may only put one point on your DMV record, a reckless driving ticket could put four points on your license.

Insurance companies use their own point systems and in most cases it is a proprietary system, so it can vary by insurer. While insurance companies assign points for speeding tickets and other driving infractions, they may also ding your record for accidents that result in a claim. Once you hit a certain point threshold, your premium will be “surcharged” which will result in a higher premium. If your point total gets too high your insurer may end up dropping you all together.

As an example, if your insurer assigns two points for a speeding ticket for 10 mph over the limit and 3 points for running a red light, you are looking at 5 points on your insurance record. If their surcharge schedule indicates that a driver with 5 points would be surcharged 1.25, then your rate is headed up 25 percent until the tickets fall off of your driving record, typically in three years.

Once a ticket hits your DMV record your insurer will most likely be upping your rates, but it may not happen until your insurance company checks your record prior to renewing your policy. Typically, insurance companies don’t pull your DMV record unless you’ve filed a claim, added a driver, bought a new vehicle or are up for renewal. However, that’s not always the case.

How long does a speeding ticket stay on my record?

It can vary by the state you live in and your insurance company. When it comes to your DMV record, most tickets, at least minor ones, fall off your record in about three years but this does vary by state. More serious offenses, such as a DUI can stay on your record basically forever. In Florida, it takes 75 years for a DUI to come off your driving record.

Your insurance record is often pretty similar, expect to be surcharged for a minimum of three years. This can vary between insurers so ask your agent how long your particular insurance company will surcharge for a specific type of ticket. Most insurers treat a speeding ticket as a minor infraction so expect it to drop off in three years or so.

Much like the DMV, insurers keep serious violations, for instance driving under the influence (DUI), reckless driving or hit-and-run, on your record for much longer. A DUI can impact your rates for five to ten years. In California for example, insurers are not allowed to offer a good driver discount for the first 10 years after a DUI.

In most cases, you will need to wait until your renewal for your rates to drop, insurers are not notified when tickets fall off your DMV record.

What can I do to save money with a speeding ticket on my record?

While a speeding ticket will most likely boost your insurance costs, there are a few things you can do to keep your premium affordable. Here are a few tips:

Fight the ticket: “We recommend if you do receive a speeding ticket to consult with an attorney. In most states a traffic ticket attorney can have a moving violation ticket reduced to a non-moving incident.  Keeping points off your driving record is the key to maintaining lower rates,” says Espenschied.

If you can get the ticket dismissed, reduced or deferred it may not hit your DMV record your insurer will never be the wiser, and you will keep your safe-driver discount.

Many states will allow you to defer a ticket for one year, which means that it will stay off your record for that year. If you manage to stay ticket free for 12 months the ticket is expunged and never makes it to your driving record. Your local clerk of court should be able to tell you if a deferral is possible.

If you do get another ticket during that year, both tickets hit your record immediately and your rates will definitely be headed up.

Shop your coverage: Shopping your coverage around is one of the best ways to lower your premium. Insurance companies rate risk differently which can lead to big differences in premiums. Always be sure you are comparing apples to apples when it comes to coverage levels and deductibles.

“If your rates have gone up you should get quotes from at least three other insurance companies to see if you can find a better rate with a different insurer,” says Gusner.

A defensive driving course may also result in a discount from your insurer, lowering your premium. Check with your insurer to see if they offer this discount and for a list of approved courses.

Discounts: Insurers offer a variety of discounts and they will all help lower your premium. Make sure you are getting all of the discounts you are entitled to receive. Ask your agent to do a discount review to make sure all available discounts are being applied to your premium. 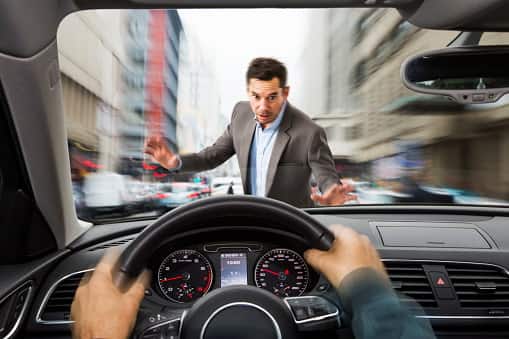 What is Comprehensive and Collision Coverage? By Penny Gusner