Talk is cheap: How insurance changed the face of psychiatry

“Why don’t you lie on the couch and tell me what’s going on?”

If you think this is how an appointment with a psychiatrist might begin, think again. These days only 10 percent of the nation’s 50,000 psychiatrists actually talk to patients in the way Sigmund Freud popularized therapy according to the American Psychiatric Association. Psychiatrists who practice both psychotherapy (talk sessions) and psychopharmacology (prescribing medication) are a dying breed.

Instead, the norm that’s dictated by insurance reimbursement payments is that psychiatrists stick to 15-minute medication checks — insurers pay more for those. A psychiatrist may see 25 to 30 patients per day and simply ask if everything is going well while they write a refill.

Meanwhile, a patient’s therapy, if they’re lucky enough to have therapy, is handled by a psychologist or licensed clinical social worker, often not even within the same practice as the psychiatrist, making coordinated care difficult. Today’s psychiatrists know little about their patient’s personal lives, a stark contrast from the lay-on-the-couch-era decades before. 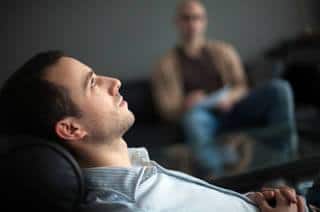 “The real change came about roughly between 10 and 15 years ago with the Prozac revolution. We had more antidepressants and more meds that supposedly were more effective,” says Dr. David Reiss, a San Diego-based psychiatrist.

While plenty of patients do so well on meds that they don’t need therapy, studies show the majority of patients do best with both medication and talk therapy. But psychiatrists are trapped in a system of insurance incentives that discourages such integrated care.

Talk simply doesn’t pay as much. “Which makes it impossible to keep track of patients as ‘people’ as opposed to a collection of symptomatology to be medicated,” says Reiss.

Going where the money is

If psychiatrists wanted to pay the bills, they had to move with the times.

“The psychiatry field has experienced an explosion in the use of prescription meds. Ironically, and according to an MD in my state, doctors can’t afford to go into psychiatry because of insurance reimbursement. He claimed it is the lowest paying field for doctors and, with the cost of additional medical school for specialization, it isn’t worth it,” says Pandora MacLean-Hoover, a Licensed Independent Clinical Social Worker in Newburyport, Mass.

Most shrinks used to treat 50 patients in once or twice weekly talk therapy sessions of 45 to 60 minutes. Now, they treat 1,000 patients in mostly 15-minute increments for prescription refills and tweaks to medication, explains Reiss Where once they delved into patient’s psyches with the skill and finesse of a trained mind master, they now regularly pull out the prescription pad and mix antidepressant cocktails like a chemist.

Insurance company reimbursement rates and health plans that discourage talk therapy are mostly to blame. Although Reiss says psychiatrists are not blameless: Greed and co-dependence on the newer paradigm plays a role. A psychiatrist can earn $150 for three 15-minute medication visits compared with $90 for a 45-minute talk session. You do the math.

“Consequently, mental health professionals have arguably the worst reimbursements in health care, and many are leaving the field or working outside of the health care insurance system,” says Ivan J. Miller, a Colorado-based psychologist and mental health reform advocate.

Worse, decades ago, psychiatrists saw patients three to four times before they came up with a carefully plotted diagnosis and treatment plan: depression, bipolar disorder or anxiety, for example. But insurers now won’t reimburse treatment without a diagnosis, so today doctors make a difficult diagnosis within the first 45-minute appointment.

As part of The Task Force on Managed Care and Healthcare Policy, Gordon Herz examined billing service information, Medicare reimbursement schedules, and Psychotherapy Finance surveys in order to track 20 years of psychotherapy reimbursement. He compared what insurance companies call “usual and customary rates (UCR),” with the “real usual and customary rates” that providers charge in communities. In most states, insurance companies have such wide latitude in determining their own UCR that the term merely means whatever the insurance company is willing to reimburse.

And it’s not so rosy for therapists at the Masters level either — marriage, family and child counselors and licensed clinical social workers fare even worse.

“In 2010, Blue Cross Blue Shield of MA collapsed our reimbursement rate to the lowest, which coincided with the cheapest plan. The company did this despite maintaining tiered premiums for their various offerings,” says MacLean-Hoover. So while policyholders continued to pay for these health plans, believing the higher rates provided better coverage, psychotherapists no longer received the higher reimbursement rates.

Indeed, spending on outpatient mental health has been flat or declining at a time that parity laws suggest mental health services should be more accessible and therefore increasing, says a 2009 report titled “Trends in Mental Health Cost Growth” in the journal Health Affairs.

“I refuse to do med visits because they do not treat anyone’s psychological problems,” says Dr. Carole Lieberman, a California-based psychiatrist and author. “Medications are only band-aids while the patient is supposed to be undergoing weekly psychotherapy to get at the root of their problem. Far too many psychiatrists have simply gone against what they know is best for the patient and acceded to med visits in order to be able to pay their mortgage and other living expenses. This is what’s causing the failure of our mental health system and the increase in insufficiently treated patients.”

The future of psychiatry

The problem is clearly multi-layered and, with violent incidents becoming a topic of national mental health fodder, the system seems broken.

“In terms of any individual incident I don’t know if it could have been prevented, but if you look at the mental health system as a whole, very few people become violent but [substandard mental health care] could factor in some of them,” says Reiss.

There’s also the problem that mental health services are an easy target for managed-care cost cutting. And there’s a long-standing stigma associated with having a mental illness. When managed care mishandles treatment of a physical health problem, patients go to their employers and complain about the insurance company. But when the issue is a mental health problem, most employees keep quiet.

Reiss thinks that if anyone looks at the long-term costs they’re going to see it’s not cost-effective to run mental health in this country as it’s currently operating.

But as long as people want the system to provide the cheapest possible mental health care possible, nothing will change.