Buying insurance based on your genetics 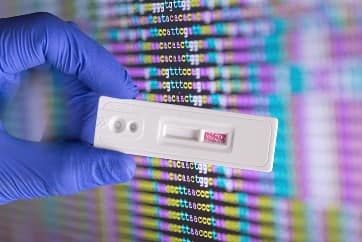 Imagine if you could know whether you’re at a greater risk for a certain type of cancer, Parkinson’s Disease or Alzheimer’s Disease. Would you want to know and would the results change how you live your life?

Genetic testing holds great promise to alert people who have an increased risk of a disease, but that promise comes with warnings and the potential detriment of the long-term care (LTC) insurance.

Not long ago, predictive genetic testing was thought of as the future, but it’s now in the mainstream. For instance, 23andMe is one company that tests saliva to provide users a look into their ancestry and health risks. In 2017, 23andMe, which has 3 million users, received the OK to screen for 10 diseases and genetic conditions, including Alzheimer’s and Parkinson’s.

Many of these tests help spot future diseases or health concerns, which can affect insurance companies in the long run. Robert Cook-Deegan, who co-authored a study, “Genetic Testing for Alzheimer’s and Long-Term Care Insurance,” said insurance executives are worried about these kinds of tests.

“They say that this could put them out of business,” he said.

Here’s why: In his research, Cook-Deegan and his fellow researchers discovered that people who take a genetic test to find out if they have traits that lead to Alzheimer’s are five times more likely to purchase LTC insurance. LTC insurance would cover most of their expenses if — or in all probability when — they need years of nursing home care. It’s like taking out a million-dollar life insurance policy the day before you know that you’re going to die. The stock market would call it “trading on insider information.”

What our genetic makeup tells us

Our genetic makeup determines who we are: eye and hair color and height. We inherit our genes from our ancestors, who pass on to us both their strengths and a predisposition to certain diseases.

If a mother is diagnosed with breast cancer, oncologists are likely to recommend that her children undergo a BRCA gene test to determine if they, too, are predisposed.

The same is true with the ApoE or Alzheimer’s gene. There is no cure for the more than 5 million Americans living with Alzheimer’s. By 2050, that number may reach 16 million. The annual cost for Alzheimer’s patients’ care is $259 billion.

The one-in-eight elderly Americans who live with this disease have a 75 percent chance of ending up in nursing care, according to Cook-Deegan’s study. The average costs or long-term care in the U.S. is more than $82,000 per year for a semi-private room in a nursing home or $92,378 per year for a private room in a nursing home, according to the Alzheimer’s Association.

Those who are diagnosed are more likely to purchase long-term care insurance when they learn the hard truth. But it’s becoming more difficult because the LTC market is no longer as active as before. As the cost of eldercare skyrockets, many of the biggest LTC insurers left the market and now life insurance with an LTC component is a more popular choice.

Insurance is predicated on the assumption that only a certain — and usually small — percentage of policyholders will actually make claims. But genetic testing tips the seesaw in favor of customers likely to use their LTC insurance, which could cause their insurers to drown. As Cook-Deegan points out, insurance companies have reason to be afraid.

State and federal laws, such as the Genetic Information Nondiscrimination Act (GINA), forbid health insurers from discriminating against anyone because of a genetic predisposition to a particular disease.

State laws govern genetic privacy for life, disability and long-term care coverage. Some states allow those tested to keep all medical information private under the Health Insurance Portability and Accountability Act (HIPAA), except in cases where there is a court order to reveal it, according to the National Conference of State Legislators. But the law allows for many opportunities to get genetic information. Newborns can be tested at birth or when paternity is in question. Criminals are tested and volunteers for clinical trials become part of a semi-public record.

Some states permit release of genetic data when there is “actuarial justification.” Others won’t allow insurers themselves to do the testing, but let them take into account the test results. Still others don’t even address the issue, seeing it as a political hot potato.

Insurance companies stress that both parties in a contract (like an insurance policy) have an equal right to know.

“LTC insurance carriers need to be on the same page with the applicant,” said American Council of Life Insurers spokesperson Whit Cornman. “An insurer must be able to know what an applicant knows about his or her health when he or she applies for coverage so the applicant, other applicants and existing customers can be treated fairly.”

Lesley Fair, senior attorney with the Federal Trade Commission’s Bureau of Consumer Protection, warns that people interested in these kinds of genetic tests should investigate their options.

Fair suggested you check the company’s privacy policy. Make sure to review if the information will be shared and who may get a hold of it. Also, make sure you’re comfortable with privacy options and don’t just choose the default position. A company may let you further restrict measures to increase your privacy.

Though genetic tests can measure risks, the Food and Drug Administration and Centers for Disease Control say the risks of those diseases are beyond genetics.

Fair added that the FTC has “brought dozens of cases challenging deceptive or unfair practices related to consumer privacy and data security – including a settlement with a business that sold products based on at-home genetic testing, but allegedly failed to provide reasonable security for consumers’ personal information.”

Many don’t want to know

Inexpensive genetic tests are readily available in doctors’ offices, drug stores and on the Internet. But an undercover investigation by the U.S. General Accounting Office warned that some of these direct-to-consumer “swab the cheek” tests could be “dangerous, irresponsible and deceptive.” The AARP tells its members not to seek out genetic testing without a doctor’s support.

Very few Americans have actually undergone genetic testing. An AARP study of 1,000 people found that 92 percent had never had any testing, and most had never given it any thought.

Among those not tested, many feared that “someone else,” such as employers, the government or insurance companies, might get their results and use the information against them. Some were skeptical of the science of genetics. Many simply didn’t want to know.

Nearly one-third of the AARP respondents cited high cost and lack of the right medical insurance as reasons for not pursuing genetic testing. While the price of some over-the-counter gene tests is less than $100, a conclusive test could cost thousands of dollars.

Kristin, a Costa Mesa, Calif., computer technician, is a typical case. She wanted to undergo testing of her BRCA gene after her mother was diagnosed with breast cancer, but was told that the test would cost more than $3,000 because her mother hadn’t been tested first.

Oncologists say that genetic testing for breast and ovarian cancer is not only a good indicator of whether people like Kristin are predisposed to a certain disease, but also could determine the form of therapy needed if they are.

What to do if you want a genetic test

Those in need of genetic testing for any reason but afraid of the cost and consequences can find assistance. Most large hospitals now employ genetic counselors.

Oncologists recommend consulting with them before you undergo genetic testing. In addition to understanding what is medically advisable, these counselors also know the ins and outs of health insurance plans, as well as your rights under state and federal laws.

How much does COBRA insurance cost? By Les Masterson
Table of contents
Get instant quotes now !