Take it from me: Insurance agents’ advice on teen drivers

Kevin P. Foley, president at PFT&K Insurance Brokers in Milltown, N.J., can recall every single accident involving one of his clients that resulted in a fatality (four total). He takes the mistakes, negligence and misfortune of others to fuel conversations about the dangers of the road with his daughter. The teen is anxiously anticipating taking the test for her learner’s permit in July 2013.

Like many parents, Foley is anxious too, but for other reasons.

As an auto insurance agent, Foley has heard many horror stories, including stories that don’t hit the media. He brings them home, and doesn’t sugar coat the tragedies.

“I tell her so she knows that accidents are real, but teenagers have a hard time grasping anyone’s mortality let alone their own,” he says. “She says that she gets it, but I’m not so sure.” 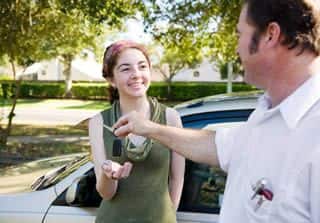 He tells his daughter that it’s not only her actions she needs to watch, but also those of others. He recalls recently pointing out a driver who made a right turn from the far left lane of the road where they were driving. The negligent driver did not cause an accident, but very easily could have.

His advice to parents with teens is to have these important conversations. Point out the bad driving judgments made by others. Share stories about both the believable and unbelievable ways accidents can happen.

Eric Kingdon, an account executive at Trustco Inc. Insurance Services in Salt Lake City, says, “I am the son of an insurance agent and my father did not allow me to get my driver’s license when I turned 16 because I did not have the 3.0 GPA needed to qualify for the good student discount,” he says. Kingdon had to painfully wait months until he received his next report card, which showed a 3.0.

“I wasn’t allowed to get my license without a 3.0, and the same rule applies to my sons,” he says. His twins are both wanting to get their licenses on their 16th birthday. Whether or not one or both boys will be allowed to take the road test on that special day will depend on their grades.

Without a 3.0 they’ll have to wait until the next report card.

“Driving is a privilege to be earned,” says Kingdon.

Kingdon recommends that parents help their teen drivers feel comfortable in the vehicle. Show them how to work the lights, windshield wipers, blinkers, hazard lights, controls, seats, and so on. Give them time to become acquainted with the inside of the vehicle before they take it the road.

Charlie Schein, an agent at Star-Schein, LLC in Hartford, Conn., has first-hand experience being the parent of teen drivers. He points out the dual benefits of accredited driver-safety training programs. The insurance companies he works with offer discounts for new drivers who take these courses and teens receive extra training they sorely need.

Schein is also a proponent of requiring a teen driver to qualify for the good student discount in order to drive. He explains that insurance companies perceive that students who earn good grades are more likely to make the right choices on the road, resulting in a lower risk factor and reduced insurance rates for the parents.

Even when a driver’s license is in hand, the training should not stop. “Parents have a lot going on and it’s hard to find the time to give their teens all of the practice they need on the road.”

Levitanus spends time behind the wheel with his teen nephew to give him additional practice.

Although it will be many years before his own daughter will be driving, Levitanus already knows that she will not be allowed to roam the California freeways on her own during the first year. Even after that, he says that teens should not drive on the freeway unless they have to.

Levitanus urges parents to be familiar with their state’s restrictions on when teens are allowed on the road, and when they are permitted to have passengers.

Since teens are easily distracted, many states have a provisional period in which newly licensed teenagers may not have passengers in the car (except siblings). Other common rules dictate the time of day teens can drive, cellphone use and other issues.

The California Department of Motor Vehicles points out the root causes of teen accidents include lack of skill and low perceptions of actual risk.

NHTSA has additional resources for parents of teen drivers.