How to avoid crashes when you’re driving with children

How big of a problem is distracted driving? This dangerous driving epidemic killed 3,328 people in 2012 alone according to the National Highway Traffic Safety Administration.

Distracted driving is anything that diverts a driver’s attention from the road, such as talking on a cellphone, texting, watching a video, eating and putting on makeup.

You may envision teens texting while driving, but distracted driving is also prevalent among those driving precious cargo: parents. 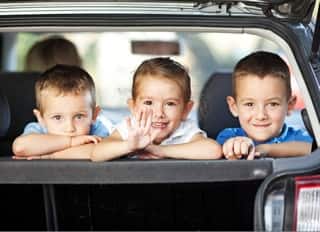 “There has been a lot of attention recently on distracted driving in the press. The focus is often on new drivers and teens who are known to be at risk for crashes when they drive distracted. We wanted to see if distracted driving is a problem for parents too,” says Dr. Michelle L. Macy, assistant professor of emergency medicine and pediatrics at the University of Michigan, who led and authored a new study that was published in the May-June 2014 issue of the journal Academic Pediatrics.

In the study, which was funded by a grant from the Michigan Center for Advancing Safe Transportation, Macy and her team surveyed 570 drivers of children age 1 to 12 years old. Drivers were recruited for the study during their child’s visit, for any reason, to one of two emergency rooms in Michigan. Parents were asked how often they engaged in 10 specific driving distractions in the past month while their vehicle was in motion and their child was a passenger.

“Thinking that parents would want ensure the safety of their child passengers, we expected parents might report less cell phone use while behind the wheel than the national average but they did not. About two-thirds reported talking on a handheld cell phone and more than one third used a hands-free device,” says Macy.

She noted that texting, emailing and Internet use while driving among parents in the study were lower than national averages.

“This may be in part due to Michigan law banning texting while driving. Not surprisingly, technology was not the only thing distracting parent drivers, 65 percent reported feeding their child and 40 percent reported picking up a dropped toy or game for their child,” says Macy.

They were surprised to find that 90 percent of parent drivers reported engaging in at least one of the 10 distracted driving activities that were asked about in this study.

On average, parents indicated they had engaged in four of the distractions in the past month while their child was a passenger and their vehicle was in motion.

“Parents with higher education and who were non-Hispanic whites reported more cellphone use and directions-related distractions like use of a navigation system. This finding may be the result of greater access to technology among some groups of parents, but as national rates of cellphone ownership in the U.S. have climbed above 90 percent we expect these differences to decrease and the problem of technology-based distractions to expand,” says Macy.

Legislators are attempting to curb this dangerous habit that is all too common among busy parents.

According to the Insurance Information Institute (III), an industry trade group, “The number of state legislatures passing measures that address the problem of driver distractions continues to rise. Twelve states and the District of Columbia ban the use of hand-held cellphones while driving; 41 states and the District of Columbia have banned the practice of texting while driving.”

Car insurance companies, which spend millions on insurance claims resulting from distracted driving, are also taking action, according to Jeanne M. Salvatore of the III.

“Distracted driving is deadly driving, And, many individual insurers have educational programs to combat this problem, as well as support auto safety organizations that focus on this and other dangerous behaviors,” says Salvatore.

A child’s observations while in the car can make an impact on future driving.

“From always wearing a seatbelt to refraining from distracting activities when behind the wheel, it’s critical that parents model good behavior, and to do so for children starting at early ages,” says Jake Nelson, traffic safety advocacy director for AAA. “Child passengers are watching from very young ages, and will develop unsafe habits even a decade before driver’s education becomes relevant.”

If nothing else, the researchers hope that their findings will help bring attention to a dangerous behavior that puts children at risk.

“I hope these findings will cause parents to think twice about multitasking when they are driving. As a pediatric emergency physician, I see first-hand the injuries that children suffer in car crashes. We all have a responsibility to focus on the task of driving when we are behind the wheel, for the sake of ourselves, our children, and for others on the road,” says Macy.