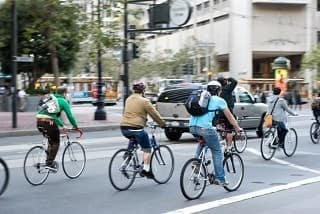 Three feet may not seem like much, but it could save somebody’s life and prevent a world of hurt for you, too.

Three feet is the distance that should be between your car and a cyclist you pass on the road.

California is among the latest states to enact a 3-foot bike passing law, requiring drivers to give cyclists at least 3 feet of clearance when they pass them. The California law went into effect in fall 2014.

Most states have some type of bike-passing law on the books. Break the law and you could get a ticket and a fine, which could impact your car insurance rates. Worse, you could seriously hurt or kill a cyclist.

The California law’s sponsor — then-Los Angeles Mayor Antonio Villaraigosa — knows this all too well. Villaraigosa was riding his mountain bike one Saturday evening in July 2010 along Venice Boulevard when a taxi cut him off. Villaraigosa flipped over the handlebars and landed on his elbow, fracturing it.

After the accident he became a bicycling advocate in a city traditionally unfriendly to bikes and he worked on the state level to push for the bike-passing law, promoted by the California Bicycle Coalition as “Give me 3.”

Wisconsin became the first state to enact a 3-foot passing rule in 1973, and as of June 2014, 23 other states and the District of Columbia had followed. Pennsylvania has a 4-foot bike passing law, and nine other states have general laws that require drivers to pass at a safe distance, according to the National Conference of State Legislatures. Some cities, such as Austin, Texas, have their own bike-passing ordinances.

Some locales are taking a proactive approach to enforcement. Last year the Austin Police Department began using undercover officers on bikes to crack down on drivers violating its Vulnerable Road Users Ordinance. Two officers in plain clothes rode single file on roads without bike lanes and then radioed information to waiting patrol cars about drivers who came too close when passing them.

Consequences of cutting it too close

“In most jurisdictions here that carries four points on your [driving record] and could very well result in higher car insurance premiums,” she says. “Your insurance company considers tickets and at-fault accidents in determining your risk and insurance premium. The bottom line is driving distracted, aggressively or carelessly when you’re sharing the roadway with cyclists is not only dangerous but can result in insurance consequences.”

So how do you gauge 3 feet?

Here’s a good rule of thumb: “It’s about the same amount of space you’d give a car with the door wide open,” says Dave Snyder, executive director of the California Bicycle Coalition.

He suggests that drivers take a moment to pause before they pass a bicyclist.

“Tap the brakes, take a breath and relax,” he says. “Wait a moment and think about passing safely. And don’t think you can squeeze by if it looks close.”