When it comes to showing Dad how valuable he is, the simplest moments speak loudest.

“It’s the quiet times,” says Jim Lin, a San Francisco Bay Area public relations professional and father of two. “It’s when you’re riding in the car having a conversation, and they’re asking you questions. When a kid is interested in what you do and in your perspective that means a lot. I realize, oh, I matter to him, too.”

The true value of dads is priceless, but the value of things dads stereotypically do around the house — from squashing bugs to fixing leaky faucets — totals $24,103 a year, according to Insure.com’s annual Father’s Day Index. The Index is based on a list of common household tasks and associated average wages from the Bureau of Labor Statistics. 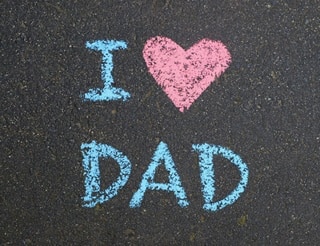 The figure doesn’t include any salary Dad might earn from a job outside the house, nor does it include parenting and household duties that full-time stay-at-home dads perform.

Estimating the financial value of the contributions a parent makes to a family is a key step in determining how much life insurance to buy. When choosing a life insurance amount, it’s wise to consider salary replacement, debt, a family emergency fund, future expenses like college and a parent’s value around the house.

Insure.com, based on an April 2014 survey of 999 dads. Respondents could choose more than one gift preference

This Father’s Day we wanted to know what makes dads feel valued. We asked three popular dad bloggers, and their answers pointed away from fancy gifts and exotic celebrations and toward everyday stuff.

For Lin, creator of The Busy Dad Blog, it’s often as simple as seeing the household operate as it should or watching his 12-year-old son and 4-year-old daughter play happily outside.

“It’s just knowing I’m providing for them, everything from their physical to emotional needs,” he says.

Fred Goodall of Houston, founder of Mocha Dad, a website focused on fatherhood, is passionate about parenting and encouraging men to become better dads and husbands.

“I grew up without my father and so I wanted to do things differently for my family,” he says.

“Sometimes as a dad you get a little frustrated,” he says. “You may tell your kid something over and over again, and when you’re trying to get your point across you wonder, ‘Are they even listening to me?'”

But then his kids will show in words or actions that they’ve taken his lessons and examples to heart.

“Those are the moments you really feel valued.”

Goodall also treasures the times when his children trust him enough to share their joys and challenges, whether it’s confiding in him about a friendship problem or sharing a favorite song.

“You have to appreciate those moments when you get them,” he says.

“What makes me feel valued is when they do the right thing when no one’s looking. It shows the things you drive home with them stick,” he says. “They’re learning while they’re watching you.”

Burley takes care of the kids on weekdays while his wife works, and they switch roles in the evenings and on the weekends when he catches up on consulting work. Acknowledgment from his wife that taking care of the kids isn’t easy goes a long way. “It’s reassuring that it really is stressing — that I’m not doing a bad job during the week.”

So how do you show Dad you value him this Father’s Day?

Forget about converting the basement into a man cave. A room remodel came in at the bottom among choices for Father’s Day gifts, according to an Insure.com survey of dads. Books and cigars were also among the least popular gift ideas.

Instead, consider taking Dad out to eat. Dinner at a favorite restaurant was the top choice, according to the survey, followed by a weekend getaway with the whole family, electronics and tickets to a show or sporting event.

The dad bloggers we interviewed say they don’t care about purchased gifts on Father’s Day, but they treasure handmade cards and crafts from their children.
Burley says his favorite way to spend Father’s Day is to go out to breakfast with the family at a nice bagel place and stop by the farmer’s market for fresh fruit.

Lin likes to eat and relax with his family and take the day off from worrying.

Goodall still carries in his wallet a laminated card his 6-year-old son made a few years ago in preschool. As for celebrating on Father’s Day, each year he and his wife and kids get their photo taken wearing matching T-shirts. He also makes up a questionnaire and asks his kids to fill it out. He saves their hand-written answers from year to year.

Types of life insurance — what’s best for you? By Chris Kissell