The biggest problem facing driverless technology isn’t a car maker’s ability to install the computer and sensors that will propel a car down an interstate at 70 mph. Both Honda and Google have already done that.

The two bigger problems are:

It is these two obstacles that Peter Sweatman, head of the Mobility Transformation Center (MTC) at the University of Michigan’s Ann Arbor campus, and the MTC hope to navigate, with the help of a public-private partnership that includes five major carmakers, State Farm Mutual, Verizon Communications and Xerox Corp., which does logistical city planning.

Sweatman and the University of Michigan ultimately want to create a “connected environment” where cars not only see the road ahead and behind, but also where vehicles “talk” to one another and to the “interface,” meaning the road on which they are driving.

This is how it works: If your car is driverless — and therefore “intelligent” — it’s aware of what’s happening with other cars on the road and can stop itself at an intersection if a car coming the other way is going too fast. It helps if that car is also intelligent and signals its approach. This is known as V2V or “vehicle to vehicle” communication.

But Sweatman and the MTC take this a step further. The intersection itself will “talk” to the cars. For example, the railroad crossing sign will signal to cars that a train is coming. This is called V2I or “vehicle to interface” communication.

Pedestrians could also be safer. Your smartphone would constantly send out a signal that the driverless car could recognize. If you unwittingly step out between parked cars, the oncoming driverless car will recognize the cellphone signal and brake to avoid a collision before the visual sensor on the car sees you.

American roads will never be the same if the MTC, and other projects like it, succeed. Sweatman’s first and foremost goal is to reduce motor-vehicle fatalities and injuries “by a factor of 10.” There are about 30,800 fatal car crashes a year, according to the National Highway Traffic Safety Administration.

Your drive-time would be cut in half, and parking mishaps — a major cause of fender-benders and minor accidents — would decline as driverless cars “valeted” their drivers to the entrance of the mall, parked themselves, and then returned for pickup when signaled by a cellphone.

This is why the nation’s largest auto insurance company, State Farm, is staking its claim in the MTC, the only insurer to do so. 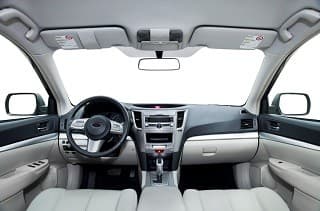 “This could allow us to get ahead of the curve,” says Carol Csanda, director of strategic resources for State Farm and a member of the MTC’s leadership team. “New safety features mean that we will crash less and when we do crash, the severity will be less.”

Car insurance savings not a guarantee

So does this mean that car insurance rates will come down? Not so fast. State Farm, along with every other auto insurer, bases its rates on the millions of pieces of data it has accumulated for decades. And that won’t change overnight. It will take a while before driverless-car data can make a dent in rate-setting analysis.

But Csanda predicts that road tests of driverless cars could speed up the process. If State Farm gets “useful data” showing that newer cars are safer, then rates will probably come down for owners of those models.

Adding all the technology to cars will also add to the price, so any car insurance savings may be offset by the additional vehicle cost.

The MTC is just starting a seven-year driverless-car journey, which will cost an estimated $100 million and include not only a crowded citylike research facility with fire hydrants and mechanized pedestrians, but also real-world driving around Ann Arbor, where the University of Michigan and the MTC are located.

Sweatman says one of the biggest advantages of the MTC is its ability to bring together competitors like Ford, General Motors, Honda, Nissan and Toyota, along with auto-parts makers like Delphi, Econolite and Robert Bosch, to lend their latest vehicles and technology.

Noticeably absent from the participants is Google. The Internet giant is working with the California Department of Motor Vehicles, which hopes to have rules in place by January to enable driverless cars on public roads. Elon Musk’s Tesla Motors, Mercedes-Benz and a host of others are also planning to compete.