Save on car insurance: Get a girlfriend 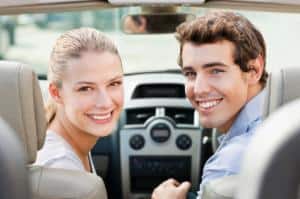 Jesse Levey recently saved $200 a year on car insuranceby having a girlfriend. The 31-year-old Californian, who works in marketing, recently got the pleasant surprise when he added his girlfriend to his auto insurance policy.

“They ran the quote and said it was $200 less per year,” he says. “She has a good driving record, but so do I. She is going to be using my car some of the time. We live in the same place.”

It turns out that one unexpected benefit of love and commitment is cheap auto insurance.

“It typically happens because the insurance company views the woman as a better risk or because the company offers discounts to family policies, which may include unrelated people who share the same home,” explains Robert Houlihan, chief product officer at Mercury Insurance.

Houlihan notes that getting married could bring down one’s car insurance price even more.

Generally, a couple must live together to receive reduced car insurance quotes on a shared policy. Shawn Christie, an insurance broker in Colorado Springs, Colo., says about 10 percent of his male clients see their rates drop when they add a wife or domestic partner to their policies, sharing the same vehicle.

Of course, the “wrong” significant other could actually increase your rates.

Before sharing a car insurance policy, ask your partner about his or her driving history, says David Snyder, vice president and associate general counsel for the American Insurance Association.

“It has often been said when you marry someone, you also marry their family. You may be marrying their insurance rating as well,” points out Snyder.

And it’s not just tickets and accidents that push up car insurance rates. Bad credit can ding you, too. If your partner is slow to pay his or her bills, says Christie, it could result in higher auto insurance rates.

“Companies have found that if you pay your bills, statistically you drive more responsibly,” he explains.

Snyder stresses that each insurance company has its own way of pricing “risks.”

Calculating rates for adding a driver “is a blending of many factors,” he says.

If your domestic status changes, you should contact your car insurance company to find out if you are entitled to cheaper car insurance rates, says Houlihan. “Anytime you are changing anything in your profile, it is always a good idea to check with your agent.”