How to haggle for a lower price with your doctor 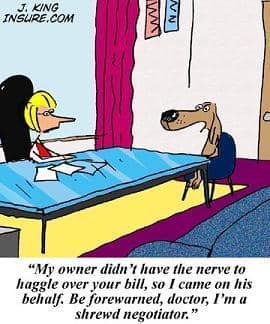 You might have negotiated a better price for a new car or bargained for a great lamp at your neighbor’s yard sale, but did you know you might be able to negotiate with your doctor to lower your out-of-pocket expenses?

According to a November 2007 survey by the Consumer Reports National Research Center, among those who have tried to negotiate medical bills, 93 percent were successful at least once.

“Everything in health care is negotiable,” says Andrew Cohen, spokesperson for The Access Project, a nonprofit organization concerned with improving health care access. “Negotiating can be a great way to reduce bills. Unfortunately, people often think that this isn’t an option when it comes to medical expenses, but it is something they can take advantage of.”

Larry Gelb, president and chief executive officer of Care Counsel, which provides employer-sponsored health care assistance, based in San Rafael, Calif., says there is no harm in asking if you can negotiate your medical bill if it becomes too much for you to handle.

“There’s nothing new about people asking for discounts on medical treatments,” says Gelb. “There’s a long history of patients negotiating with their providers for lower prices on elective procedures, such as laser vision surgery or psychotherapy.”

“In today’s economic environment, in which everyone is financially squeezed, providers will be more open to discounting their fees in order to maintain the volume necessary to cover their fixed costs. Also, the stigma attached to asking for financial aid has greatly diminished,” Gelb says.

There’s both an art and a science to haggling for lower health care prices, says Gelb.

“Research indicates outspoken individuals have better health outcomes,” he says. “But even I would think twice about creating bad feelings between me and my surgeon if I was about to have surgery.”

The doctor/patient relationship is as delicately balanced as the employer/employee relationship, Gelb says. “You don’t want to march up to your boss and demand a raise,” he says. “You’re probably much less likely to get the desired outcome by doing it that way than if you calmly explain the reasons why you need to make more money. The same thing goes for asking your doctor to lower his prices.”

Tips on how to bargain

Many patients — who are either uninsured or left with hefty out-of-pocket medical expenses even after insurance has paid out — can successfully talk their doctors and hospitals into lowering their bills. This does not apply to Medicare patients or to patients’ co-payments and deductibles, for which you are contractually bound.

While there are no hard and fast rules for successfully lowering your out-of-pocket health care expenses, here are several good guidelines:

Cohen advises to deal with the bill immediately. “Don’t put them off,” he says.