Your auto insurance agent probably is the last person you think of calling when you find a new job, or when your son gets his driver’s license. But telling your agent about those life changes could save you from being caught with inadequate car insurance because your policy wasn’t updated.

Failing to report such changes — because either you forgot or you’re hoping to lower your car insurance rates — cost the auto insurance industry $15.4 billion in revenue in 2010. That’s almost 10 percent of the total $164.1 billion in personal auto premiums written, according to a new report by Quality Planning, a company that validates policyholder information for insurers. 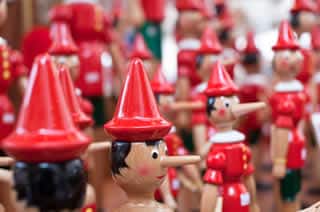 Here are five of the most common lies people tell their auto insurance companies.

Drivers who inaccurately estimated how many miles they drive each year–whether for work or pleasure–created $3.1 billion in losses for insurers in 2010. People who drive less often get lower premiums. Customers who forget to report a longer commute when they take a new job may think this little lie doesn’t matter much.

Your son probably celebrated when he got his driver’s license, but you may have forgotten to tell your car insurance agent. Such “unrated drivers” cost $2.7 billion in lost premiums last year. Even if they only drive to school each day, 16-year-old males are among the riskiest drivers to insure.

This is the most common type of lie that State Farm agent Deborah Becker hears in her Wisconsin office. Telling this fib could save you a few hundred dollars in the short-term, but if your teen hits another car, you could be liable for thousands of dollars in medical bills and damages.

“I think people are doing themselves more harm by lying than telling the truth, because they can have their policy voided,” Becker says.

It’s best to be truthful, she says, because it’s easier for a car insurance agent to come up with more affordable policy options before an accident takes place.

3. Not reporting accidents to your insurance company

We all want the lowest auto insurance quote possible. Forgetting to mention past accidents and traffic violations is easy to do, and it’s something you’d think your car insurance agent would catch. Even so, there were $2 billion in lost premiums in 2010 in this area, mainly because insurers didn’t pull such records.

If you have a lot of tickets, finding an auto insurance agent who doesn’t request your driving record might seem great. But it can hurt you when you file a claim and your agent checks your driving history, says Lynette Simmons Hoag, a Chicago lawyer who has represented both car insurance companies and insured drivers in disputes over records.

“People assume that the insurance company investigates. Yes they do, but only after you have an accident, not before,” she says.

Discounts often are offered for years of driving experience or being a good student. Some professionals, such as teachers, receive auto insurance discounts. Changing jobs to a profession that doesn’t garner a discount and not reporting it helped contribute to $1.9 billion in losses from misidentified driver characteristics.

There can be a big difference in car insurance rates between a mom who drives a van around town to pick up her kids and a dad who drives a sports car to work. But failing to accurately report how a car is used – for example, if Mom drives the sports car regularly and isn’t listed as the main driver – is known as underreporting a vehicle or driver assignment. Such omissions cost the car insurance industry $1.8 billion last year.

Sometimes auto insurance questionnaires can be vague, says Simmons Hoag. When that is the case, it is best to err on the side of too much communication. That way, no one can accuse you of fudging the truth. “If you really want to protect yourself, be more than honest,” Hoag says.