5 signs you’ve been in a staged car crash

Accidents happen, but some car crashes are by design.

They work like this: You’re driving along innocently when a car comes out of nowhere, and wham! Before you know what hit you, passengers pile out of other cars complaining of injuries. Strangers urge you to visit a certain clinic or lawyer. Witnesses conveniently appear. And finally the other driver and passengers file large damage and/or injury insurance claims against you for thousands of dollars.

“The money in fake injury claims can be so lucrative, it’s hard for organized crime to pass up,” says James Quiggle, spokesperson for the Coalition Against Insurance Fraud in Washington, D.C.

Auto insurance fraud is big business. Prosecutors say a crime ring they broke up this year tried to fleece $400 million from insurers through staged crashes and phony claims in New York City. 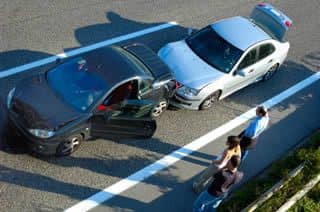 The Insurance Information Institute estimated that a typical two-car family in Florida paid an extra $100 a year for car insurance in 2011, effectively a “fraud tax” because of staged accidents and other scams.

In March the National Insurance Crime Bureau (NICB) asked drivers in the Las Vegas area to look out for crooks targeting trucks for staged crashes. Some 100 suspected staged crashes along the I-15 corridor were reported to the bureau in the previous 12 to 18 months, and as many as 25 targeted big rigs.

More recently, Minneapolis-St. Paul has become a hotspot. The NICB reported in January that the rate of organized crime involvement in auto insurance fraud rose 230 percent in Minnesota in the last four years. The Insurance Federation of Minnesota says the increase is due to a crackdown on fraud in other states.

“You start herding the cockroaches around, and they start falling off to new locations,” Quiggle says.

Nobody is immune from getting targeted in a staged crash.

But crooks tend to single out elderly people, women who are alone and drivers of nice cars, he says.

So how can you tell if you’ve been in a staged crash?

The “swoop and squat” is the most common staged crash tactic, according to the California Department of Insurance. Traffic flows along smoothly. A car pulls up beside you, so you can’t change lanes. Then the driver in front of you slams on the brakes, causing a rear-end collision.

2. A car comes out of nowhere at an intersection

Swindlers use a couple of different tactics to take advantage of you at intersections. A driver might motion you forward and then slam into you, claiming he never gave you the signal.

Or a driver motions you forward to make a left turn in front of his car. But then as soon as you enter the intersection, he pulls forward, blocking your way, and another car crashes into you.

The “right-turn drive down” tactic happens when you try to make a right turn from a stop sign. A car parked at the curb accelerates forward and hits the rear corner of your car. The driver says you ran the stop sign or pulled in front of him.

3. Pressure to go to certain clinics or attorneys

“Runners” and “cappers” show up at the accident scene and urge you to go to clinics or attorneys that are actually fraudulent. Quiggle says some criminal rings also send people to real accidents to persuade victims to go to their crooked medical and legal professionals.

“Jump-ins” happen when people suddenly appear and jump into other cars, claiming they were passengers. You should also be suspicious if the other driver and passengers say they’re injured, despite minor damage to the vehicles.

You should be suspicious when a witness conveniently appears and backs up everything the other driver says.