Relatively roomy, relatively inexpensive and relatively stingy with gasoline, small SUVs also are among the cheapest vehicles to insure.

It’s not just because they don’t cost a lot. The same 40-year-old driver would pay $200 more a year to insure a less expensive Mazda3 hatchback than a Mazda CX-5 SUV.

“It’s all about who buys them,” says Penny Gusner, consumer analyst for Insure.com. “Younger drivers might prefer the sportier car, and families need the room of a crossover. One of those groups files more insurance claims than the other.”

Nationwide average rates for models in the category can vary by more than $200 a year.

The segment’s best sellers are the Honda CR-V and Ford Escape; over a five-year car loan, a buyer would pay, on average, about $500 more to insure the Ford.

Below are small crossovers with a base sticker price starting under $25,000. We’ve listed nationwide average annual rates for the all-wheel-drive models below.

The cheapest small SUVs to insure 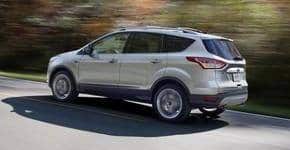 Rates were not available when the survey was run for several best sellers that were new or redesigned for 2014, such as the Toyota RAV-4, Nissan Rogue and Jeep Cherokee.

Rates are derived from a study commissioned by Insure.com from Quadrant Information Services. Averages are based on a 40-year-old male who drives 12 miles to work, with policy limits of 100/300/50 ($100,000 for injury liability for one person, $300,000 for all injuries and $50,000 for property damage in an accident) and a $500 deductible on collision and comprehensive. The policy includes uninsured-motorist coverage. Rates were averaged across multiple ZIP codes and insurance companies.