Are you entitled to brand-name car repair parts? Know your rights

Your newly repaired car just returned from the auto shop after a nasty accident and you’re pleased to observe that the car looks almost brand new. And you only had to pay out the deductible required by your car insurance policy. 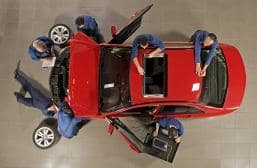 Dig below the shiny surface, however, and other questions may arise. You may wonder whether replacement parts used in the repairs came from your original automobile manufacturer or from an independent manufacturer that produces generic parts, often called “aftermarket” parts.

To some, this “secondary” auto parts industry is a shadowy world that operates outside the bounds of strict government regulation and can even put drivers at risk should substandard parts be used in car repairs.

Others say aftermarket parts are as safe as original equipment manufacturer (OEM) parts and that the industry helps consumers by competing with major automakers, keeping repair costs down and reducing car insurance rates for everyone.

The case for aftermarket auto parts

“Nobody wants to sell or install an inferior part because businesses don’t want people to come back with complaints,” says Rich White, senior vice president of marketing and member relations for the Washington D.C.-based Automobile Aftermarket Industry Association.

“If there was a problem, it would have been publicized by now,” he says. “We have not found, nor do I believe there exists, any reports or studies suggesting aftermarket parts have caused problems.”

The fact is, tens of thousands of cars and light trucks are repaired every year with generic parts. It’s been that way since 1970, when auto-repair shops were no longer required to use OEM parts, says Loretta Worters, vice president of the Insurance Information Institute (III).

“Because most of the independently made parts are lower-priced, they have also helped to bring down the prices of all OEM parts,” Worters said. “Many states now require the option of generic parts.”

Worters cites a Consumer Reports story that said the cost of a generic fender for a 1992 Toyota Camry had dropped to $60 in 1996 from the $325 Toyota originally charged for the same part in 1992, a direct result of healthy business competition.

The case against aftermarket parts

But some consumer advocates believe professional and governmental oversight of the aftermarket industry is lax and that quality and performance of the part is sacrificed in the name of quick profits. They are particularly concerned about parts that have been recycled from salvage yards and “reconditioned” before they are reused.

“The key issue is that consumers don’t often know repair shops have incentives to use junkyard parts to fix their cars,” says Douglas Heller, executive director of California-based Consumer Watchdog.

“People ought to know that the insurance company is giving the repair shop a kickback to use non-OEM parts. There’s accountability with OEM parts because there’s a car maker behind it. When something’s pulled out of a junk yard and it doesn’t work, there’s no one who’s held accountable, and it could lead to a situation where lives are at stake … When I’m putting my son in the car, I want to know that the car was restored under the safest conditions.”

While most states have insurance departments that theoretically oversee the replacement-part practices of car insurance companies, only five have adopted consent or disclosure laws governing the use of generic parts, according to the Property Casualty Insurers Association of America. They are Arkansas, Indiana, Kansas, Rhode Island and West Virginia.

In Indiana, for instance, an insurance company cannot direct an auto repair shop to use a non-OEM part without the consent of the car owner for five years past the model year of the automobile. In Rhode Island, the consent period is 30 months.

Choices may be limited for older cars

With state regulations spotty, car insurance companies have broad discretion in deciding whether OEM, generic or recycled parts are used in a particular car repair. Whatever restores the car to its “pre-loss condition” is usually the operative term.

“We do prescribe recycled parts if they are appropriate, and when their use would restore the car to its pre-loss condition,” says Dick Luedke, spokesperson for State Farm Insurance. “If it’s an older vehicle, and the right parts aren’t available, we’ll match the vehicle with a similar part that was made after market.”

Luedke says most “crash parts,” or recycled parts, are exterior bumpers and quarter panels that have little bearing on the mechanical operation of the automobile.

If a customer demands new OEM parts, State Farm asks the customer to pay the difference in price between an OEM and a generic or recycled part. State Farm does this in order to hold down car insurance rates for its customers.

Meanwhile, White, of the Aftermarket Automobile Industry Association, notes that some aftermarket parts incorporate improvements to OEM parts that were found to have been operating less than satisfactorily after being road-tested a few years.

“It’s all about trust,” White says. “If you’re going to keep an old car for another year and you don’t really need an original part, you want to have that variety so you can get the product you need depending on your circumstance.”

OEM parts, particularly for older-year models, are not only more expensive, but they are often under-stocked and not as readily available as generic parts, White says.

“The beauty about the aftermarket is you can take you car in the morning and have it back that night because there are adequate distribution systems in place to get you that part,” he says.

Worters of the Insurance Information Institute says elimination of the aftermarket parts industry would drive up costs between 50 and 100 percent and cause insurers to declare more total losses from car crashes, with a corresponding increase for auto insurance quotes.

More total losses also means more junked cars — probably not a desirable conclusion at a time when most industries are moving toward more sustainable and environmentally-friendly practices.

“Ultimately, more cars will wind up in the junkyard and they will be junked at a faster rate than they would be without a competitive crash-parts market,” Worters says.