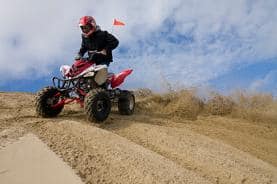 Driven by several decades of explosive growth, America’s off-road vehicle scene has generated a cloud of acronyms along with dust and dirt. There are ORVs and OHVs. Plus ATVs and ROVs, to cite the most commonly used labels. Let’s take a moment to clear the air.

ORV (Off-Road Vehicle) has become the umbrella term for a broad category of recreational vehicles capable of heading for the hills. But if you’re bumping across certain federal roadless areas, then you’re driving an OHV (that’s Off-Highway Vehicle).

If you are astride a motorcycle-style seat slung between four fat wheels, you’re riding an ATV (All-Terrain Vehicle). Wildly popular since the early 1980s, they still account for the bulk of off-road sales. But over the past decade, they’ve been joined out in the boonies by ROVs. An estimated 416,000 of these Recreational Off-road Vehicles are now in use across the United States.

As a relative newcomers, the ROV name is in flux. Sometimes they’re called side by sides, or SxSs, after the feature that distinguishes them from ATVs: a pair of seats that let people sit next to each other.

While equipped with four tires, a brake and gas pedal, seats belts, and a steering wheel, you’d never mistake a muscular ROV for a sedate back-green golf cart. For one thing, their extra carrying capacity has made them increasingly common on farms, at construction sites and in hunting camps, where they’re favored for hauling dead deer out to the road. And unlike a golf cart, they sport a rollbar-style frame.

Despite that frame, the U.S. Consumer Product Safety Commission (CPSC) questions whether ROVs are safe.

The commission says 115 people died in ROV accidents between January 2003 and August 2009. Another 100-plus were injured. A major reason, says commission spokesperson Sonia Hayes-Pleasant, is that ROVs handle very differently from ATVs. The ROV’s rollbar frame and other carlike features may contribute to the problem by giving riders “a false sense of security.”

In a rollover, the commission staff warns, ROVs may offer inadequate side-to-side stability, poor steering and too little protection for occupants. For those reasons, the CPSC opened a public-comment period last fall as the first step in creating mandatory safety rules for ROVs. 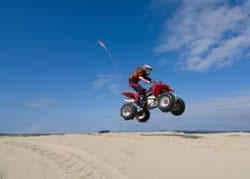 Manufacturers disagree with the government agency’s approach and warn that it could effectively ban ROVs. The Recreational Off-Highway Vehicle Association (ROHVA), a nonprofit trade group sponsored by major ROV manufactures, says any problems could be better handled by voluntary industry-government talks. ROHVA has been preparing its own comments to submit by a mid-March deadline. At that point, says spokesperson Stacey Hall, the association will release a detailed public statement about whether further safety standards are needed.

While the rule-making process typically takes several years, Hayes-Pleasant says, “We don’t want to take ORVs from riders. We just want to make them safer.”

Both sides have been down this road before.

In a 1988 consent decree with the ATV industry, the CPSC forced the phase-out of three-wheel ATVs over concerns about their stability. Manufacturers shifted production to four-wheel (quad) versions and also agreed to impose engine-size restrictions on ATVs operated by children less than 16 years old. In that same period, industry-sponsored rider safety classes became widely available. Car insurance companies now routinely require enrollment in such classes as a condition for writing any ORV policy. Few states actually require owners to buy auto insurance for ORVs, as long as they’re not ridden on roads.

Given that new ATVs can cost $4,000 to $9,000 and ROVs $8,000 to $12,000, most owners spring for a full liability, collision and comprehensive insurance policy. If drivers lack health insurance, they can buy Medical Payments coverage with their ATV’s insurance policy.

Brian Otolski, an assistant vice president at Foremost Insurance and who specializes in insuring off-road vehicles, estimates that the average premium for an ATV or ROV runs between $150 and $200 — far less than the average car insurance policy.

How can insurance be dirt cheap when ATV accidents seem so plentiful? Otolski points to these reasons:

Otolski  says insurers consider many of the same factors used for car insurance for determining your car insurance rate: your driving record, age, gender and the type of vehicle being insured. A high horse-power sports model, says Otolski, will likely cost more to insure than a utility hauler.

Over the past decade, off-roading has increasingly become a family affair. Fun haulers – which are full-size RVs with hydraulic backend gates – make it easy load up a household’s worth of ORVs and head out for a weekend in the sand or rocks. On holiday weekends, John Dearing, a spokesman for the federal Bureau of Land Management, says it’s not unusual for 50,000 people to show up at southern California’s Imperial Sand Dunes. There, groups of fun haulers circle like covered wagons with ORVs staked around them like horses.

“There is a trend of it moving into a family activity,” says Otolski. “The parents like to ride, so now their spouse or their kids do that. It’s outdoors and you’re spending time together.”

A 2007 Foremost Insurance study found that nearly two-thirds of households with ORVs have kids. While children less than 16 years old are legally restricted from using adult-sized ATVs, he says it’s impossible to know how closely parents enforce the rule.

But according to the CPSC, riders under age 16 account for a third of all ATV injuries and deaths. Another study found that children under 16 are four times more likely than older riders to require emergency room treatment for ATV injuries.