Forget the fun, warped mirrors of amusement parks. At your high school reunion, you’ll experience true terror: an irrefutably accurate reflection of the march of time.

For the price of a single ticket home, you can witness the horrifying truth that your former classmates — and you — are getting old. Going gray, getting bald, growing soft. Dying.

No one is spared the jolt of this realization, and John Weeks, a geography professor at San Diego State University is no exception.   He was startled by what seemed like a long list of deceased classmates from his and his wife’s 50th high school reunion.

“Our first reaction was shock at the number — 43 out of a graduating class of 412 — 10 percent,” he writes on his educational blog, Weeks Population. 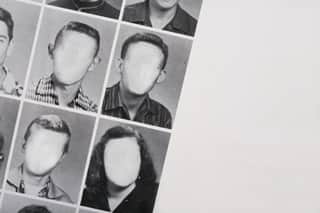 So Weeks did some research. Using life expectancy tables from the National Center for Health Statistics, part of the federal Centers for Disease Control and Prevention, he calculated the expected rate of death for men and women of his generation. Double shock: His class was actually faring better than most.

“In all events, it was sobering to realize that the initial number of dead classmates was not higher than we should have expected,” Weeks wrote.

To younger graduates, a 20 percent mortality rate among great-grandparents might not seem surprising. So what can they expect when they pass the memorial table at their own earlier, more hair-abundant, reunions?

“It’s always a shock,” says Bari Belosa, who has organized more than 10,000 reunions as president  of Reunions Unlimited, in New Jersey. It remains startling news even as Facebook extends the social grapevine.

“You grow up thinking older people died. To find out a contemporary has died is a terrible shock, and it’s a comment on your own mortality,” she said. “This is somebody you went to school with, that you got on the school bus with, that you went to kindergarten with. It hits very close to home, and people are upset to see that.”

Is your class typical?

At our request, a Florida actuarial firm agreed to calculate the expected number of deaths by various high school reunion dates. Using data from the U.S. Census Bureau and the Social Security Administration, Wakely Actuarial, based in Palm Harbor, Fla., provided rough averages for the American population as a whole. It assumed each class had an equal number of men and women.

On average, a graduating class of 330 seniors could expect the following number of classmates to die:

“It’s hard for me fathom,” says Mike Polasky, the consulting actuary at Wakely who ran the numbers and recently attended his 20-year reunion. “I thought, ‘We work on these numbers all the time, but when you internalize it, and think, from my high school class, one out of 50 died already, they seemed like high numbers to me.’ “

What to expect for your class

To estimate the statistical death-rate norm for any class size, Polasky provided the following rough figures:

Again, these general statistical guidelines don’t take into account demographic variables such as gender, income and ethnicity. An all-girls school can be expected to lose fewer graduates, for example, because women have a longer life expectancy. That’s also why women pay less for life insurance than men of the same age and health.

After attending his own reunion with “too many reminders of ‘Time’s Wing’ed Chariot,’ ” former talk-show host Dick Cavett, writing in the The New York Times, wondered why he’d yet to attend another.

“I have an odd theory,” he writes.

“Could it be an irrational fear of walking in to that registration room on Day One and — in a moment out of ‘The Twilight Zone’ — discovering my own picture on the ‘Those Who Have Left Us’ wall?”

Whole life insurance: How it works By Nupur Gambhir

Types of life insurance — what’s best for you? By Huma Naeem

How to read your life insurance policy By Shivani Gite

Who’s who on a life insurance policy By Huma Naeem