First things first, talk to the at-fault driver’s insurance, as well as your own.
Written by: Geoff Williams

Geoff Williams is a freelance journalist and author in Loveland, Ohio. He has been writing about insurance and personal finance since the mid-2000s. His work has appeared in numerous publications, including Life magazine, Ladies’ Home Journal, The Washington Post, CNNMoney, Entrepreneur, Forbes.com and U.S. News & World Report.

Nupur Gambhir is a content editor and licensed life, health, and disability insurance expert. She has extensive experience bringing brands to life and has built award-nominated campaigns for travel and tech. Her insurance expertise has been featured in Bloomberg News, Forbes Advisor, CNET, Fortune, Slate, Real Simple, Lifehacker, The Financial Gym, and the end-of-life planning service.

If you’re ever unlucky enough to be in a car accident, assuming you and your passengers are unhurt, your thoughts are naturally going to quickly turn to the financial damage.

You’ll need to take steps immediately to protect yourself financially. Whether or not a car accident is your fault, you should:

Read on to learn everything you need to know about what to do after a car accident that isn’t your fault. 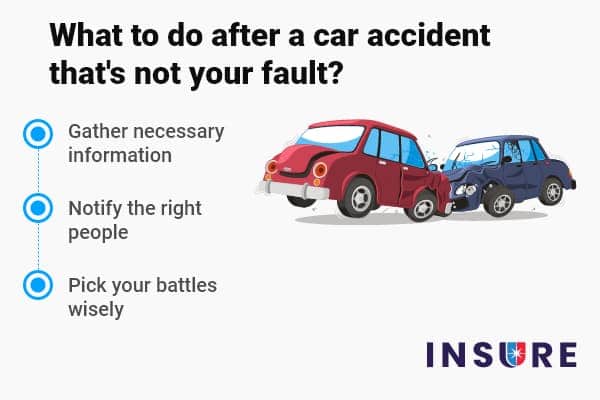 What should you do after a car accident that wasn’t your fault?

Being in a car accident is a stressful experience, even when it isn’t your fault. It can be difficult to know what to do and how to proceed after an accident. Here are some tips on what you should do if you find yourself in this situation.

Gather necessary information at the scene

The driver who crashes into your car is responsible for reporting the accident to their car insurance company. However, unless your insurance agent makes it clear that they’ll be contacting the other driver’s insurance company, you may want to contact their insurer as well. Motorists who cause accidents are often reluctant to report them.

It’s vital to get complete information on the other party at the accident scene. Collect the following:

In addition, the National Association of Insurance Commissioners has a Wreck Check auto accident checklist you can print and keep in your vehicle. Your phone can help you collect and exchange the right information.

Using a Google map satellite images of the intersection or accident area may also help explain how the accident happened. And, if you have a dashcam be sure to find and save any footage of the accident so you can share it with the insurance company. That is especially helpful if the other driver doesn’t admit responsibility to their insurer.

After a third party accident, inform the other person’s insurer that you have been involved in a crash with one of its policyholders and make sure to relay only the facts of the accident. Even if you believe the other driver to be at fault, it’s not smart to say that. Instead, give the insurer the facts to show their driver is at fault and liable for your damages. You’ll be far more credible that way.

Although you may not have caused the accident, you should also contact your insurance company. This establishes your good-faith accident-reporting effort and can aid you if the other party’s insurer denies responsibility for the accident or their insurance was not valid at the time of the incident and you need to make a collision claim.

Decide if you need to file a legal claim

The at-fault driver’s insurer may tell you to seek payment from your own insurer because it has no evidence of its policyholder’s fault. Although most states have made it illegal for an insurer to deny claims without reasonably investigating the facts, you may not want to fight the other person’s insurance company.

If you make a claim with your insurer, it likely will choose to fight the other insurance company for compensation if it finds that the other driver is at fault. But if you decide to fight the at-fault driver’s insurer on your own you’ll need a lawyer — especially if you’ve been seriously injured. An attorney can help you navigate the sometimes-murky laws that govern insurance. But keep in mind that if you hire an attorney, they will take a cut of any settlement they help you get.

You may have evidence of the other driver’s fault — maybe they even admitted it at the scene — yet you find your claim denied by their auto insurance company. Why? Because they probably told a version of how the accident happened that doesn’t square with yours. Their insurer may stand behind that story in order to avoid paying your claim.

Sometimes the insurance company will take its policyholder’s position, even if it contradicts the police report.

If all else fails, file a claim with your car insurance company

Even if you’re not at fault, you can make a claim with your insurance company for payment of damages and injuries — if you have the right coverages.

If you have collision insurance, file a claim with your own carrier. It will pay for the cost of repairs or total loss of your vehicle. If you take this approach, you will have to pay your collision deductible toward repairs. However, you may get that money back if your insurer is able to settle with the other driver’s insurance company.

If it turns out the other driver is uninsured and you have uninsured motorist coverage property damage (UMPD), you can make a claim for your vehicle’s damage. There is normally no deductible for UMPD claims.

How does car insurance work when you’re not at fault for an accident?

When you’re involved in an accident you didn’t cause, you should collect the other driver’s information at the scene so you can make a claim against their liability insurance. When you do this, the claim goes on their insurance record, not your own. If you have collision insurance and medical payments coverage or Personal Injury Protection — MedPay and PIP help pay medical expenses after a car accident that results in injury — tell your insurer about the accident. If the other driver doesn’t have insurance, or has low limits, you can make a claim to your insurance company.

What is a third-party insurance claim?

In most cases, if you aren’t at fault in a car accident, the other driver’s state-mandated liability insurance coverage would pay for damage to your car, property and for medical bills for injuries, up to the limit of the policy. This is especially useful if your policy doesn’t have adequate coverage. In no-fault states, however, regardless of who is determined to have caused the accident, you’d file a claim with your own insurance company.

What happens if someone else crashes your car
Can you switch car insurance after an accident?
You crashed a what?!
Are you entitled to brand-name car repair parts? Know your rights
Why your insurance company has to pay for your illegal acts
How much will my insurance go up after an accident?
What to do after a car accident
Best and worst vehicles for preventing passenger injuries
"Diminished value" car insurance claims get the wrecking ball
It's not your fault that you're to blame
How to make a car insurance claim for a hit-and-run accident
In over your head: What happens if accident damage exceeds your car insurance?
How to avoid problems with salvaged vehicles
Auto direct repair programs reduce headaches
See more >

How does a third-party insurance claim work?

It is important to remember that the at-fault driver’s policy will only support paying for your repairs, up to their coverage limits. For example, assume your car is declared a total loss by the competing insurance firm and is valued at $50,000. If the other driver’s coverage limit is $40,000, you may be required to pay $10,000 out of pocket to replace your vehicle.

How to file third-party insurance claims

A third-party claim is a claim you file with the insurance of another motorist. As noted, you are the third party. You are referred to as the third party because you are making a claim with a policy that doesn’t provide you coverage.

Below are the steps you can follow to file a third-party insurance claim:

Work with an insurance adjuster: After you file a claim, the at-fault driver’s insurance company will assign an adjuster. The adjuster will investigate the accident, figure out who was at fault and give an estimate of how much it will cost to fix the damage.
Receive the settlement check: If the adjuster finds out that the other driver was responsible for the accident, they will pay for the repairs either by sending you a check or paying the body shop directly.

Do insurance rates go up after an accident caused by a third party?

Your car insurance rates aren’t necessarily going to increase at renewal time if you make a claim under your own insurance policy for an accident that wasn’t your fault.

Most state laws prohibit insurers from surcharging policyholders or raising their premium rates for accidents in which they weren’t at fault. However, those laws do not preclude your insurer from dumping your policy at renewal time if you’ve made a few recent claims of any type.

Do you have to report an accident to your insurance if it’s not your fault?

You don’t need to, but you should just incase to avoid being blamed for the accident. If the accident is truly determined to not be your fault, your rates probably won’t go up. But often, rates don’t go up for the person who wasn’t at fault in a car accident, and some states have laws preventing your rates from going up if the accident was not your fault.

How to deal with an at-fault driver’s insurance company?

Just like you would your own driver’s insurance company. You give them the details of the accident and any necessary documentation. Ideally, however, you want to go with your own insurer first and let the insurers work everything out between them.

Geoff Williams is a freelance journalist and author in Loveland, Ohio. He has been writing about insurance and personal finance since the mid-2000s. His work has appeared in numerous publications, including Life magazine, Ladies’ Home Journal, The Washington Post, CNNMoney, Entrepreneur, Forbes.com and U.S. News & World Report.