Cigar smoking is an expensive habit, and we don’t mean the cost of premium cigars. Based on medical evidence, life insurers judge cigar smoking to be a habit that lowers life expectancy. So, if you often smoke cigars, cigarettes or a pipe, or chew tobacco — even if you’re otherwise healthy — you’re going to be placed in a smoker risk category and pay higher life insurance rates. 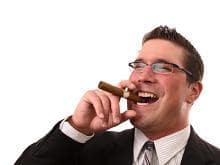 If you think cigar smokers shouldn’t be grouped with cigarette smokers, consider this: It is not unusual for some premium cigars to contain the tobacco equivalent of an entire pack of cigarettes, according to the U.S. Department of Health and Human Services (HHS).

And that leads to major health problems. According to the National Cancer Institute, scientific evidence has shown that cancers of the oral cavity (lip, tongue, mouth, and throat), larynx, lung and esophagus are associated with cigar smoking. Furthermore, evidence strongly suggests a link between cigar smoking and cancer of the pancreas. In addition, daily cigar smokers, particularly those who inhale, are at increased risk for developing heart and lung disease.

But what if you occasionally enjoy a cigar at a wedding but don’t consider yourself to be a smoker? Many life insurance companies  will allow the “celebratory” or “occasional” cigar smoker to still qualify for non-smoking rates. Some insurers define “occasional” by allowing you to smoke a number of cigars per year (generally 12 or less) whereas others go by a level of cotinine, the major metabolite of nicotine, in the urine. Of course, the urine sample you provide for your life insurance exam must be nicotine-free, too.

For example, New York Life differentiates between the regular and occasional cigar smoker based on answers given on the life insurance application regarding frequency of use and based on urine sample results. If you’re a regular cigar smoker, you’ll be grouped in with all the other smokers at the higher rates.

Standing out in the industry is Prudential, which will bestow a “nonsmoking standard plus” rate (that’s a rate between preferred and standard) on regular cigar smokers, pipe smokers and tobacco chewers.

For some insurers, a policy declination based on cigars may depend on policy type. For example, some insurers won’t take cigar smokers for term life policies but will offer them universal policies. With term life rates so low, they can’t afford the possible risk.

There can be severe consequences if your life insurer catches on to regular smoking that you’ve lied about. Companies are fairly strict on contesting claims on nicotine use. For example, if you make it past your urinalysis and secure a policy but then die of a heart attack, and it comes to light that you were a regular smoker, your life insurance claim could be denied.

Or, say you applied for a policy a year ago and were offered smoker rates that you didn’t take. Don’t try to apply with a different company and lie to get nonsmoker rates; your previous medical exam results will sit in a database operated by MIB Group for seven years. When the insurer checks your new application against the MIB database, that old history will come to light.

It’s better to tell the truth and pay the extra premium than put your policy at risk.

If you purchased a life insurance policy under a smoker rating and have quit for years, you may be able to get reclassified and lower your premiums. Insurers will vary on their rules for how long you must be smoke-free, so contact your life insurer to find out if you qualify for a reevaluation.