Surprise! You’re not covered for building up to code

If a disaster covered by home insurance destroys your house, one big expense might catch you by unpleasant surprise — the cost of meeting new building codes.

Most standard home insurance policies don’t cover the expense of bringing the house up to current codes if the structure didn’t meet the latest regulations before disaster struck.

It’s a problem that many East Coast homeowners face in the wake of Superstorm Sandy. Hundreds of residents in risky flood zones in Connecticut, for instance, must elevate their homes if they want to rebuild them. Houses that suffered serious damage must meet current sea level elevation requirements and all other building codes when they are rebuilt.

The Federal Emergency Management Agency offers homeowners with flood insurance $30,000 of “Increased Cost of Compliance” coverage to help pay for the elevation, but that’s often not enough to cover the cost.

“This has been a big issue in the wake of big storms,” says J. Robert Hunter, director of insurance for the Consumer Federation of America. “Consumers go to an agent to buy insurance, the agent says it’s ‘full coverage,’ and they assume they’re insured. Consumers don’t read the fine print.” 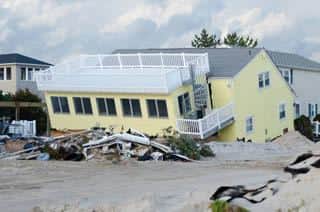 And they don’t learn about the insurance holes until they file a claim.

Unless you’re in the construction trades, you’re probably unaware of how building codes have changed through the years. After all, you’re not required to update the house every time a code is changed. But once you rebuild, all the current regulations come into play.

Building codes vary by community. Often they change as the result of disasters, such as earthquakes or floods, says Tully Lehman, a spokesperson for the Insurance Information Network of California.

Many new codes were created after the 1906 San Francisco, 1933 Long Beach, 1971 San Fernando and the 1994 Northridge earthquakes in California, for instance. New building standards to protect homes better from wildfires were developed after the 2003 and 2007 Southern California wildfires. New construction standards have also been set in flood zones in many parts of the country.

“If you have an older home, it could be quite costly to bring it up to code,” he says.

“Our coverage is designed to be comprehensive,” he says.

Lehman recommends reviewing your home insurance policy with your agent to determine whether you have coverage for building code upgrades and if you should purchase additional coverage.

Milnamow recommends the coverage for anyone who has an older home or lives in an area where building codes have changed a lot, such as coastal and earthquake-prone areas.

Hunter, meanwhile, wants insurance companies to make their policies easier to understand. He has asked states to require that insurers provide consumers with a simple checklist of what a home insurance policy covers and what it doesn’t cover. None so far has run with the idea, but New York officials recently said that they’d take it under advisement, he says.

Is mortgage disability insurance worth it? By Les Masterson