Reality TV and talk shows have put hoarding in the spotlight, showing in vivid and heartbreaking detail what happens in the worst cases.

But hoarding is also something many of us witness firsthand. 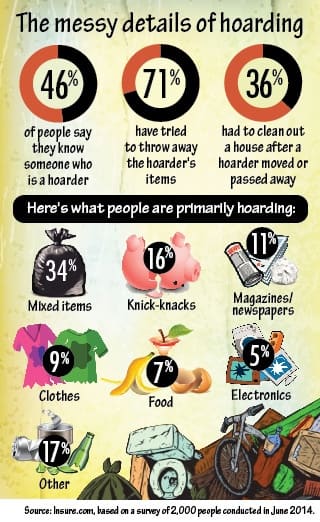 According to a survey by Insure.com, 46% of adults say they know someone who hoards.

Among those who know a hoarder, here are the culprits:

Compulsive hoarding is more than just poor housekeeping or collecting a lot of stuff. Collectors usually display their possessions with pride and keep them organized. In a hoarding situation, the items are usually in disarray, according to the International OCD Foundation.

The foundation says compulsive hoarding includes all three of the following:

Too much stuff everywhere

All sorts of things are hoarded. According to Insure.com’s survey, these are the most commonly hoarded items:

Among write-in answers for “other,” people named boxes, broken-down cars and, in many cases, simply “everything.” And much of it is “stacked to the ceiling,” many reported.

Bugs on food, rat droppings, pet poop, maggots, dead animals and even murder plans were some of the “most shocking” items seen in hoarders’ piles. Other oddities spotted were 200 pairs of shoes, boxes of empty pill bottles, collections of fast-food and Starbucks cups, and used Band-Aids.

Hoarding becomes a home insurance issue when it creates health and safety hazards.

“There can be liability concerns, depending on what type of material is being kept,” says Bryan Cook, a senior assistant vice president for Amica Mutual Insurance Co. “Too much debris around the residence could attract kids or cause someone to trip or fall.”

Fire risks are another serious concern. Too much stuff could also hide other problems, such as decay or mold, or make it difficult for emergency workers to respond, Cook says. 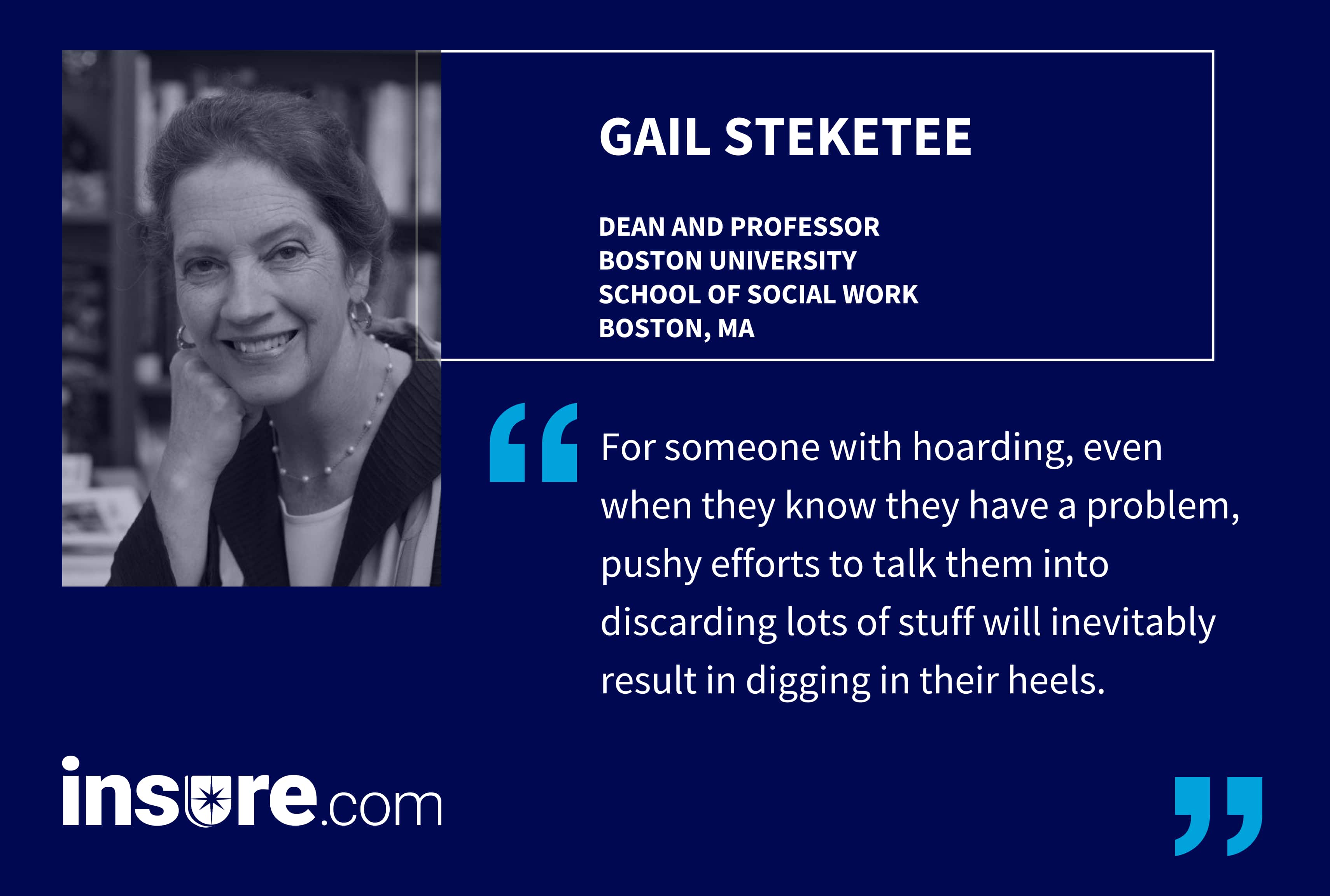 In the most extreme cases, the sheer weight of the items could damage the structure, says Loretta Worters, vice president of the Insurance Information Institute.

Of the Insure.com survey respondents who said they know a hoarder, 59% said the piles are a fire hazard, and 53% said the items are a health hazard. Almost 20% said the hoarding was a hazard to the health of animals.

Despite the hazards, cleaning it up is easier said than done.

“For someone with hoarding, even when they know they have a problem, pushy efforts to talk them into discarding lots of stuff will inevitably result in digging in their heels,” says Gail Steketee, dean and professor of the Boston University School of Social Work and co-author of “Buried in Treasures: Help for Compulsive Acquiring, Saving and Hoarding.” “A much better approach is to put one’s self in the place of the person with hoarding and imagine that the objects, whatever they may be, are wanted or at least the person is unsure whether giving them up will be OK.”

Among the Insure.com survey respondents who know hoarders, 71% had tried to get rid of items. Of those:

The hoarders themselves had a variety of reactions to others’ efforts to get rid of things (respondents could choose more than one selection):

Some of us are forced to deal with houses filled to the brim. Among those who knew a hoarder, 36 percent said they had to clean out a house after a hoarder moved or passed away.

Of the 54 people who identified themselves as hoarders, 76% said they were successful in throwing away items. Another 17% said they tried but couldn’t, and 7% said they hadn’t tried.

The homeowners insurance industry was aware of hoarding problems long before TV producers got wind of the issue.

“We’ve always been attuned to the risks that can come up with the accumulation of clutter,” says Cook.

But it’s not something that comes up every day, he adds. “We don’t see it all that much, and it’s rare we see a situation like what you see on those TV shows.”

Worters says home insurance companies wouldn’t necessarily know a policyholder is hoarding unless they did an inspection before they insured the property or during the life of the policy. An insurer would learn about hoarding, for instance, during an inspection after a claim is made. Even if the claim weren’t the result of hoarding, the insurer would still want to address any hazards found to prevent future claims.

Whether a large amount of clutter is harmless or hazardous is a judgment call, Worters says, “based on the knowledge and experience of a property inspector and an underwriter. There are no hoarding standards as far as I know with any companies.”

“We try to address it strictly from a risk standpoint, not a lifestyle standpoint,” he says.

If inspectors found hazards from hoarding, Cook says, they would point those issues out to the homeowner and explain why they were dangerous. Then they would educate the homeowner on how to address the problems and give them a timeframe to accomplish the tasks. The solutions and timeframes would depend on the situation.

“We tend to look at each one of these on its own merits and circumstances,” Cook says. “Then we will follow up to make sure they’ve taken action.”

If the homeowner refuses to address the problems, then “maybe we’re not the company for them,” says Alicia Charles-St. Juste, vice president at Amica.

Cook says someone with a hoarding issue who met the company’s requirements to remove potential hazards would not face a premium increase. There is no system for determining premium based on hoarding risk.

Worters says nonrenewal of home insurance is typically done only in extreme cases. In the worst cases, cancellation in the middle of the term is possible if the property is in such poor shape that it’s materially different than the risk the insurance company agreed to insure.

Tips for helping loved ones who hoard

When you see the mess created by someone else’s hoarding, your first impulse might be to start cleaning it up and throwing things out, regardless of whether the owner wants any help.

Instead, take a breath  and approach the situation with care.

Here are some tips from Gail Steketee, dean and professor of the Boston University School of Social Work: