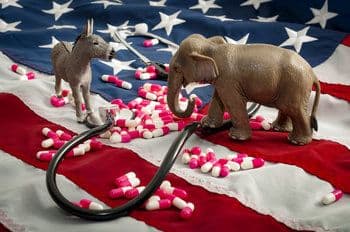 Most Americans — regardless of political party — agree that health care is one of the most pressing issues in the 2020 presidential election.

In a new survey of 1,000 people, Insure.com found that more than three-quarters of respondents said health care will play a huge role in their choice for presidential and congressional candidates this year.

Insure asked respondents to gauge health care’s importance on the election by choosing between 1 and 5 (1 being not important and 5 being the biggest issue):

The top choice for all three (Democrats, Republicans and Independents) was a 4 — slightly more than half of each gave health care importance a 4. Republicans were more apt to pick 3 than Democrats or Independents — about one-quarter of Republicans chose 3.

Most agree that health care is an important issue, but what do they want to see happen? All three groups chose reducing health insurance costs as the most important health-related election issue.

Here are the results:

Here are the top three health-related issues by party:

The biggest difference by party is Republican support of repealing the ACA. Only 3% of Democrats and 8% of Independents chose repealing the health law as the top health-related issue, compared to 20% of Republicans.

On the flip side, 22% of Democrats and 12% of Independents picked strengthening the law as the top issue, compared to just 6% of Republicans.

We found that a slight majority of people surveyed aren’t satisfied with the American health care system. Here are the responses:

Public option, Medicare for all has support

Here are the results:

A public option was the top choice for all three.

Which party is better with health care?

Republicans are currently in control of the White House and Senate, while Democrats have the House. The two political parties have entirely different stances on what they want for health care.

We asked which party does a better job with health care. Here are the results — as well as the results from 2019:

Not surprising, 88% of Democrats selected Democrats; 73% of Republicans picked their party and 53% of Independents chose neither.

This year, we asked questions about politics and insurance companies. Companies have taken social justice stances this year, which have been both applauded and criticized depending on the stance and person’s political viewpoint.

Insure.com contracted OP4G to survey 1,000 respondents in October 2020 about their thoughts about health care and the 2020 election. The respondents’ break down was Democrats — 37%; Republicans — 36%; and Independents/Unenrolled — 25%.