Taking the slow lane by storm: Insurance for low-speed vehicles

Did you see that little truck zipping along in the lane next to you? How about that vehicle that looks more like a golf cart than a car? Are these tiny things even allowed on the road?

Surprisingly, in many states, the answer is yes. They are called low-speed vehicles, or LSVs, and they are taking the slow lane by storm.

The lowdown on low-speed cars 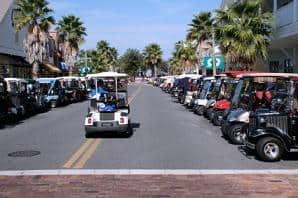 According to the Insurance Institute for Highway Safety (IIHS), a low-speed vehicle has four wheels and a top, used primarily for short trips and recreational purposes. Originally intended for retirement communities with golf courses, LSVs can reach a speed of up to 25 miles per hour. They have very basic safety features, such as mirrors, reflectors, lights, a windshield, parking brake and seat belts. And, yes, they can qualify for car insurance.

LSVs were originally intended for use in low-traffic areas with low speed limits. They’re popular in closed communities, and drivers of regular-sized vehicles know to be on the lookout for the smaller vehicles when driving in those communities. On the open road, however, it’s a different matter.

Minitrucks, originally sold as off-road vehicles for construction sites and farms, are much smaller than passenger trucks but might be able to reach speeds in excess of 55 mph if you floor it. Minitrucks and LSVs are exempt from the federal safety standards that passenger vehicles must meet. However, LSVs and minitrucks are often allowed on roads with a posted speed limits  up to 35 mph.

In recent IIHS crash tests, the GEM e2 electric vehicle and the Changan Tiger Star minitruck were put to the test. In crashes with a Smart Fortwo (the smallest car on the road that meets crashworthiness standards) the LSV suffered damage severe enough to lead to debilitating injury or death for all of its passengers.

The Tiger Star minitruck was tested in an offset crash with a Ford Ranger XL. Again, the damage was significant enough to indicate debilitating injury, including neck injuries in real-world collisions.

The results were published in an IIHS news release in May 2010, where the combination of vehicles and LSVs on the roads was called a “deadly combination.”

David Zuby, chief research officer for IIHS, says the problem is with how LSVs are being used.

“We are not aware of any formal plans to upgrade the crashworthiness of LSVs and to some extent; making them as safe as regular cars would defeat some of the attractiveness for their original purpose,” Zuby says. “For example, making LSVs as safe as regular vehicles likely would raise their costs. We’re not as critical of LSVs’ crashworthiness as we are critical of their expanded use beyond relatively safe driving environments for which this class of vehicles was originally intended.”

“Moving LSVs outside of closed neighborhoods mixes them with more higher speed traffic with drivers less likely to be looking out for them,” Zuby pointed out.

Why are they legal on the road?

With all these pressing issues about safety, why are LSVs legal on the road?

Many people buy LSVs because they are cheaper and conserve energy. As a greener method of transportation, LSVs often qualify for a $2,500 tax credit from the American Recovery and Reinvestment Act of 2009, as well as additional incentives from certain states. For instance, California offers a tax incentive of up to $1,350 on certain LSV models.

But in many states, it comes down to the demands of consumers. “Some states are allowing LSVs on more roads because the people who own LSVs in those states want the freedom to drive them more places,” Zuby explains.

Car insurance companies have long been open to insuring golf carts and the like, but usually only for their intended purposes.

Today, some auto insurance companies will insure LSVs for off-road use only, while other companies are opening the door to insurance that covers LSVs on main roads. Often, those who already have an auto insurance policy on a standard vehicle can add their LSV or minitruck to their existing policy in order to get good car insurance rates.

Minimum car insurance requirements by state
Can I insure a car that isn't in my name?
Non-owner car insurance: How to get car insurance without a car
15 things you didn't know your car and home insurance policies cover
How auto theft investigators work - and how to hire your own
What is uninsured and underinsured motorist coverage?
Car warranties versus auto insurance
How Does Gap Insurance Work and Do You Need it?
Do you need full coverage on a financed car
Do you need the VIN number for the insurance quote?
Veterans and military guide to insurance
What is liability auto insurance?
5 questions to ask your car insurance agent
The secret life of your car's VIN
"Stacking" your UM/UIM auto insurance coverage
10 things that aren’t illegal but should be
SR-22 insurance: What is it and how does it work?
Auto insurance: How to make sure you’re not underinsured
Full coverage auto insurance: What it costs to get covered
Will my car insurance still cover my vehicle if I had it towed out of the road after hitting a deer? I have a witness to the event.
Double-car insurance dilemmas
How to cut your car insurance bill in half
12 things you don't know about car insurance that could cost you
Untangling your insurance during a separation or divorce
My wife was half asleep when she went out to scrape snow and ice off her car. She used a snow shovel, not realizing she picked up the one with the sharp metal blade at the end, so she scratched the car all over. Will her car insurance cover the damage?
My car was rear-ended and totaled but it was paid out by my insurance company and I am left with a balance on my car. Can I make a claim with the other drivers insurance company to pay the balance?
As I was backing out of the driveway I hit a parked car that was parked beside the curb in the street causing what looked like mild damage. My vehicle had no damage. Will I have to pay a deductible?
Don't let other people drive your car
Car insurance for blind drivers (you heard that right)
Would I lie to you about car insurance? Only if it pays off
Insuring your tricked-out, souped-up car
See more >