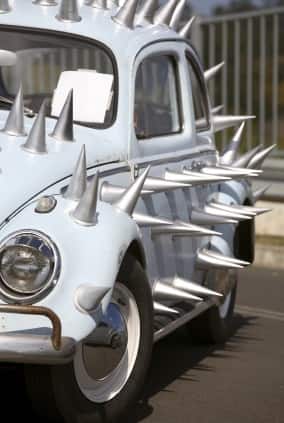 For some car owners, “bling is king” and style and speed are everything. But one thing is certain: “Souped-up cars” or “bling machines” — as they are commonly called — are considered high risk by many car insurance companies because their parts are often worth more than the car itself, and their owners have a reputation for driving on the wild side.

It’s not that you can’t buy car insurance coverage, but there may be restrictions. These vary by state, insurance company and the extent of modifications you’ve made to your vehicle. Your policy may restrict you from driving on a race track, limit the number of miles you drive per year or cap how much you will reimbursed for your car in the event of a total loss.

Try telling Jim Kreisman, owner of Jim Kreisman Insurance Agency Inc., based in Scottsdale, Ariz., that you want to insure a tricked-out ’95 Acura Integra that — without modifications — is valued at roughly $5,000. But you want coverage for the car’s newly modified 385 horsepower engine ($5,000), chrome donks (wheels) with spinning reels and racing tires ($10,000), chrome bumpers ($420), vertical doors ($1,000) and neon undercar accent lights ($200). Maybe you even added a custom paint job and body art to the car that cost you another few thousand.

“Good luck,” says Kreisman. “We’ll insure Ferraris and Bentleys, but souped-up cars? We won’t [insure] them. They are too high risk. . . . The [standard insurance companies] won’t touch them.”

Bling machines are not necessarily luxury vehicles, classic hot rods or fancy sports cars. Popular choices for souped-up cars are often older Honda Civics, Acura Integras, Ford Mustangs, Mazda RX7s and Nissan 350Zs — because you can buy them cheap and use your bucks for the bling.

“They take the inexpensive cars and soup them up,” says McKeel Hagerty, chief executive of Hagerty Insurance Agency in Traverse City, Mich., an automotive specialty insurer. “Now they got a high performance car for not a lot of money.”

You may pay tens of thousands for parts, but overall it’s still cheaper than buying a new Ferrari. Hagerty Insurance specializes in offering insurance for modified cars. These include classic cars, show cars, hot rods and souped-up tuner cars. However, Hagerty will not insure your bling machine if it’s a regular-use vehicle that you drive every day — like a showy car you drive to work.

“If their use is consistent with a collector car, we will insure it,” he adds. “But if it’s a race car, we have a program that covers it to and from the track,” but not on it.

Car insurance quotes for a bling machine are obviously higher — if you want to be fully covered for the modifications you’ve made.

Let’s say you want to insure a ’93 Toyota Supra that you bought for $7,000. You spent four years making modifications to it. It now has a 600-horsepower engine, custom paint job, spoilers, ground effects, custom wheels, a highly customized interior and roughly $30,000 worth of stereo components. You poured around $130,000 into the car. Hagerty Insurance will sell you an agreed-value policy insuring your car for that amount.

That means if you total it, you’ll receive predetermined amount from your insurance (in this case, that’s $130,000). But you will not be covered if you race the car and crash it. Your annual premium will cost between $2,000 to $2,500 — and that’s assuming you have a clean driving record. Hagerty also requires that each driver in your household (where your bling machine is housed) has a regular use vehicle.

“Modern day tuner cars are an inexpensive way for car enthusiasts to build the car with the looks and performance of their dreams for much less than the cost of a high end sports or exotic car,” Hagerty says. “It’s the fun car that you don’t have to have.”

There are other insurers that specialize in coverage for modified cars. According to its Web site, K&K Insurance, based in Fort Wayne, Ind., sells policies designed for professional racing teams, motorsports country club members and individuals who drive street-legal, high-performance cars at race tracks. The minimum you would pay for your annual premium is $1,500 a year for $1 million in coverage.

But you don’t necessarily need to find a specialty insurance company in order to get an auto insurance quote for a modified vehicle. It depends on how much work you’ve done to the car. For example, let’s say you spent a few thousand to upgrade your stereo equipment, add custom wheels and install a spoiler and neon undercar accent lights. You may find coverage with a standard insurer.

Leah Knapp, spokesperson for Progressive Insurance, says that when you purchase comprehensive or collision coverage through Progressive, you will automatically receive at least $1,000 of custom-parts and accessory-equipment coverage in most states. If that’s not enough, you can purchase up to $4,000 in additional coverage.

“We define [custom parts and equipment] as anything that is not offered by the original manufacturer of the car or installed by the dealer as a part of the original sale,” Knapp says.

Insurance companies may have their own ideas on what they consider “modifications.” Have you ever spotted an “art car” on the road? These cars are modified as an act of personal artistic expression. They can range from paint jobs in the form of hippie “flower power” patterns to something as extravagant as turning your car into a drivable sculpture with protruding spikes. You may have a hard time getting a car insurance quote.

“Just because you painted the car with purple polka dots and it cost you $5,000 doesn’t mean that it increases the value of the car,” says Kip Diggs, spokesperson for State Farm Insurance.

When it comes to more traditional modifications, Diggs says State Farm looks at them on a case-by-case basis. It does not charge a higher premium for modified vehicles but it’s highly unlikely that you would be covered for high-powered engine modifications or very expensive upgrades under a standard cash value policy.

No matter how you’ve modified your car, it’s important to let your insurance company know. Be specific about the types of modifications you’ve made. While you may be tempted not to tell your insurance company about your upgrade escapades for fear that your premiums could increase, it is not a wise move. In the event of an accident, you may not be reimbursed for all the bells and whistles you’ve added to your car. In a worst-case scenario, your insurer could possibly void your insurance policy because of undisclosed modifications.

“What we want people to do is to let us know when they make modifications,” Diggs says, adding that it’s a good idea to save receipts for any custom work completed on your car. It’s smart to take photos as well.

Most insurance companies, including Progressive and State Farm, will not cover you if you crash while racing — legally or otherwise. In some states, they may also have exclusions that will not cover damages suffered while test-driving your car on a race track. Progressive’s exclusion says that coverage does not apply to a “loss to any vehicle resulting from, or sustained during practice or preparation for: (a) any pre-arranged or organized racing, stunting, speed or demolition contest or activity, or (b) any driving activity conducted on a permanent or temporary racetrack or racecourse.”

Some states will not allow insurance companies to deny coverage for accidents that occur as a result of driving on a race track — as long as the vehicle was not involved in a race.

Jerry Kunzman, executive director of the National Auto Sports Association, says that some states will not allow insurance companies to exclude coverage for accidents that occur as a result of driving on a race track — as long as the vehicle was not involved in a race. So, you should be able to drive your souped-up bling machine as fast as you want in the confines of a race track and still be covered by your insurance company. But you need to check with your state’s department of insurance and read your insurance policy in detail.

In most cases, drivers of cars that are cop magnets are terribly underinsured for their modifications. “You have the car parked on the street and a garbage truck backs into it. It’s totaled,” says Diggs. “By the end of the day, you’re probably not going to recoup all that.”