Having a gun in your home can have repercussions for your homeowners insurance, especially the liability portion of your policy, so understanding the various impacts is important.

When it comes to home insurance, most home insurance companies have no issue with gun ownership. In most cases, insurers don’t even ask about firearms during the application process. However, there can be exceptions.

Coverage levels are usually capped, and if you shoot someone — even an intruder — you may be on your own.

“Home insurance policies typically cover firearms as property in the same way they would cover any other property in your home,” says Robert Hartwig, president of the Insurance Information Institute. “If a firearm were damaged in a fire or stolen, the damage or loss of such property would generally be covered under a standard homeowners policy, subject to any deductible and policy sublimits.”

Since guns are considered property, they ordinarily have no impact on your rates. You don’t even need to tell your insurer. 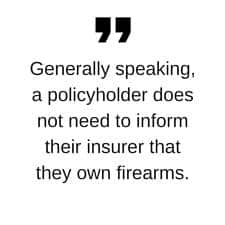 “Generally speaking, a policyholder does not need to inform their insurer that they own firearms,” confirms Hartwig.

Other states like Massachusetts are studying the issue. Similar legislation on the federal level has stalled in Congress.

Unlike many other forms of insurance that offer discounts in almost every category, discounts on firearms policies don’t exist.

“For all intents and purposes, there are no discounts or surcharges for having a firearm,” says Kristofer Kirchen, with Advanced Insurance Managers in Tampa, Florida.

Sublimits can be an issue if you have many guns or are a collector. Sublimits are dollar-amount limitations in your policy that apply to specific losses. Most insurers consider guns to be valuable property and include them with items, such as artwork, jewelry, and furs. All of these possessions are subject to sublimits. This means the coverage is usually limited to $2,500 for your entire gun collection.

If your gun collection is valued above $2,500, you will need to purchase a rider. A rider is an insurance provision that adds more coverage, which provides more protection but increases insurance rates.

“Owning guns doesn’t automatically affect your insurance rates, but if you do opt to purchase a separate rider, there will be an additional charge,” explains Carole Walker with the Rocky Mountain Insurance Information Association.

Cost for the additional coverage varies by insurance company, but forum users reported varied levels of rider coverage from $15,000 to $50,000 of replacement coverage for a single annual payment ranging from $50 to $380.

Another option is to purchase a separate, standalone policy to protect your gun collection. ArmsCare Plus, which is endorsed by the National Rifle Association (NRA), offers additional protection for all legal firearms as well as accessories, such as scopes, mounts and slings. The policy protects against damage, fire, theft, and loss. Coverage for $10,000 in replacement value insurance costs less than $110 per year.

While homeowners policies usually cover damage or theft related to firearms, liability issues can be a mixed bag – especially if you intentionally pull the trigger.

“If the gun is accidentally discharged, the homeowners insurance policy would typically cover the costs of any resulting property damage, injury or death to a third party, such as a neighbor or visitor to your house,” says Hartwig

Homeowners insurance will also likely cover accidents outside the home, such as when hunting or at a shooting range.

“If you are hunting and fire your gun in a manner where you are trying to hit a deer but miss, that is not an intentional act. You should be covered. The same would apply if you were at a range,” says Jonathan Stein, an attorney in Elk Grove, California.

Are these situations covered by homeowners insurance?

Let’s take a look at some situations and whether homeowners insurance covers them.

This chart is for general reference and not to be used as legal advice. Individual situations are subject to review by insurance company.

Commercial activities, however, are another matter.

“If you were being paid to guide a hunt or teach someone to hunt or shoot at a range then it is a business use, and there is no coverage,” advises Stein.

Without a homeowners policy for protection, you would need a business policy that would to cover your needs.

According to Dean Davison with Lockton Companies, expect to pay around $300 a year for a $1 million in liability protection on a professional policy offering the following coverages:

A genuine accident is usually covered, but there are exceptions. You may be on the hook for damages if alcohol or drugs are involved when the accident occurs, depending on local laws.

“While coverage may apply in some circumstances, the outcome could vary depending on the specific circumstances of the claim and applicable state and local laws,” warns Hartwig.

In many states, leaving a loaded weapon in the open where a child can access it is a crime. Plus, the gun owner would be responsible for the cost of damages should the child intentionally hurt someone with it.

Also, if you are in the middle of committing a crime when an accidental shooting occurs, all hope of insurance coverage is gone, since intentional and criminal acts are excluded from coverage.

If an accidental shooting occurs with one of your weapons, you could be on the losing end of a wrongful death lawsuit. Attorney fees, damages and medical bills could quickly exceed a low-limit liability policy included in homeowners insurance. Settlements in excess of $1 million aren’t uncommon.

Liability limits start at $100,000 on a standard homeowners policy, but most experts recommend that policyholders carry at least $300,000. Gun owners should consider carrying even more, or look at an umbrella policy.

Umbrella policies are usually sold in $1 million dollar increments and are fairly affordable. According to the Insurance Information Institute, umbrella policies cost about $150 to $300 per year for a $1 million, the next million would cost roughly $75 and then $50 for each additional million.

Homeowner policies have “intentional injury exclusions,” which means if you intentionally cause damage or harm, you are on your own in any resulting liability claims. 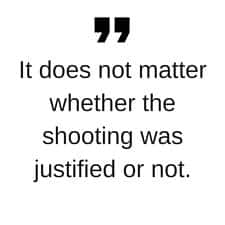 “All policies deny coverage for intentional injuries,” explains Thomas Simeone, with Simeone & Miller LLP. “So, if you shoot at and strike an intruder, there will likely be no coverage because you intended to injure them. It does not matter whether the shooting was justified or not. However, if you accidentally shoot someone, there will be coverage because you did not intend to injure that person,” continues Simeone.

This means that if you intentionally shoot a burglar or anyone else, and they sue you, the cost of your defense and any resulting award to that person would fall to you, which can quickly become very expensive.

A standalone self-defense policy can step into the breach for intentional injuries.

“The primary benefit of a self-defense policy is that it provides coverage for acts of self-defense that are generally not covered by homeowners/renters insurance policies,” explains Jeff Hewitt, a senior vice president with Lockton Affinity.

“It fills the void that is left in homeowners or renters policies, which usually classify an act of self-defense as an intentional act,” continues Hewitt.

For example, policies at mynrainsurance.com provide coverage starting at $100,000 for combined single limit with a $50,000 criminal defense reimbursement sublimit for $135 per year.

According to Hewitt, the following are major benefits of a self-defense policy:

The best way to avoid a liability claim is to make sure your weapons are properly stored and handled, but additional coverage could be a financial lifesaver if the unthinkable were to happen.