This year’s wildfire season is already off to a grim start, with the Black Forest Fire near Colorado Springs destroying some 500 homes and killing two people in June. 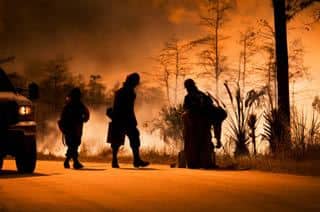 As recovery begins in Colorado, here’s a look at the 10 costliest wildfires in U.S. history through last year. Data is from the Property Claim Services Unit of ISO and the Rocky Mountain Insurance Information Association. Dollar amounts are adjusted for inflation through 2011, except for the 2012 Waldo Canyon Fire.

An ember that blew out of a resident’s fire pit ignited the Fourmile Canyon Fire outside of Boulder and hot, dry winds spread the blaze quickly through rugged terrain. The fire burned 6,000 acres, forced 3,000 residents to evacuate and destroyed 168 homes. No lives were lost, a feat credited to the preparedness of Boulder County and the local fire districts.

The fire near Colorado Springs started as firefighters were still trying to gain the upper hand with the High Park Fire near Fort Collins, 130 miles to the north. The two fires led to the most expensive wildfire season in the state’s history. The Waldo Canyon Fire destroyed 347 homes and damaged 46 others. Two people died. Investigators say the fire was caused by humans but don’t know who did it or if it was intentional.

Also known as the Painted Cave Fire, the blaze started above the city and sped down the hills. At U.S. 101, the flames jumped the highway and raced toward the Pacific Ocean. One woman who tried to find safety in a creek died, and more than 500 homes went up in smoke. A decade later, Santa Barbara County successfully sued a local artisan who was accused of starting the fire in an ongoing feud with a rural neighbor. He denied the charges, but his land was later auctioned off to pay the county.

Propelled by the hot, dry Santa Ana winds, this fire started in the brush above Laguna Beach and barreled down the canyons to the Pacific Ocean. The blaze, also known as the Laguna Beach fire, destroyed 366 homes. Investigators suspected arson, but the crime remains unsolved.

Almost 1,700 homes and businesses were destroyed in the Bastrop County Complex Fire in the small community 30 miles southeast of Austin. Economic losses were the largest per capita in the nation’s history. Two people died in the fire. Investigators say the blaze ignited after a dead pine tree fell against a power line and sparks fell into dry brush.

Also known as the Old Topanga Fire, the blaze started in brush near the water tower on Old Topanga Canyon Road and then quickly raged out of control in the rugged Santa Monica Mountains just north of Malibu. By noon the flames moved into Malibu, and wind drove the fire into the coastal canyons. Every state west of the Continental Divide sent resources to help fight the fire, the largest mobilization of emergency resources in history at that time. Three people lost their lives, and 388 homes and businesses were destroyed.

More than 80,000 San Bernardino County residents were evacuated when the Old Fire raged out of control and destroyed 1,000 homes. Five men died from heart attacks trying to flee. The tragedy didn’t end there. Two months later rain on the fire-ravaged hillsides led to a mudslide through a church camp in Waterman Canyon, killing 14 people. Rickie Lee Fowler, a methamphetamine addict, was convicted of murder and arson for the fire and was sentenced to death in January this year.

Of the series of wicked wildfires that burned across Southern California in October 2007, the Witch Fire was the worst. The blaze destroyed more than 1,000 homes and 200 vehicles. The fire started in Witch Creek Canyon, moved into San Diego Country Estates, Ramona, Rancho Bernardo, Poway and Escondido areas and then jumped Interstate 15 to wreak havoc in Lake Hodges, Del Dios and Rancho Santa Fe.

Two small fires started by a lost deer hunter to signal for help led to one of the worst blazes in the state’s history. The Cedar Fire began in the Cleveland National Forest in San Diego County and quickly grew out of control in the gusty Santa Ana winds. The fire killed 15 people, injured 104 others and destroyed more than 2,200 homes.

A small brush fire that reignited after firefighters thought it was extinguished led to the most expensive wildfire in U.S. history. The fire started high in the Oakland Hills, where brush was dry from five years of drought, and then raced down the slopes and spread in many different directions. Flames engulfed hundreds of homes within an hour and turned tony neighborhoods into streets of hell. The firestorm killed 25 people and devoured 2,843 homes and 433 apartments.