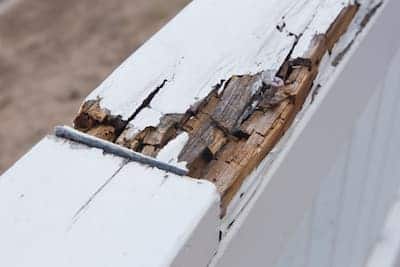 We’ll cover the situations when rotting wood might be covered by your home insurance.

Typically, the only time homeowners insurance covers wood rot is when it is the result of a covered peril and usually that damage is “sudden and accidental.” For example, the accidental discharge or overflow of water from a household appliance is a peril covered by most homeowner policies.

If a pipe bursts and causes water damage to your floor joist, then at the time of the damage you likely could make a claim that will be approved. If instead, it appears that the rot isn’t caused by a certain event but is a result of aging materials and perhaps poor maintenance, you are not likely to get an approved claim.

What if there’s mold? For the mold to be covered, it also would have to be associated with a covered peril, like a burst pipe. Mold caused by water due to condensation, excessive humidity or flooding is typically excluded from coverage provided by a home insurance policy. (See “Mold coverage hard to find in home insurance policies.”)

So, will your homeowners insurance cover saggy floors? As usual with insurance, it depends. If the sagging floors are the result of a covered peril, you’ll likely be covered. Otherwise, you’ll be on your own.

If the dry rot was caused by a covered peril and not the result of negligence, the home insurance company will usually cover the claim. However, most commonly, dry rot is the result of a leak or flood incident and then poor ventilation to the area. Many homeowners insurance companies consider dry rot to be a preventable issue.

Structural problems can be quite complex. Sometimes a structural issue is the result of something like a severe storm that causes flooding or a burst pipe. Other times, the issue may be caused by improper materials used to build the home or even soil settling. If your structural problems are caused by covered perils (and not the result of neglecting to resolve or report an issue), home insurance may step in to save the day.

Does homeowners insurance cover theft outside your home? By Nupur Gambhir

What is HO-6 insurance? By Shivani Gite

Is landlord responsible for tree damage to car? By Casey Bond