Before you know it, your kitchen is on fire

The distractions of holiday cheer can lead to kitchen fires. According to Liberty Mutual Insurance, Thanksgiving and Christmas Day are the biggest days for reported kitchen fires, with three times more than any other days of the year.

Liberty Mutual points to several dangerous cooking behaviors that lead to these fires, including disabling a smoke alarm while cooking and leaving the kitchen frequently while cooking.

Industry experts see the results firsthand. According to Greg Raab of Adjusters International, a public adjusting firm in Utica, N.Y., his company sees a noticeable spike in kitchen fire claims during the holidays. 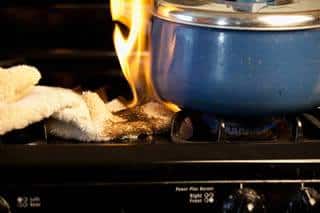 “The majority of claims that we see over the holiday are from unattended cooking,” says Raab. “I think just like anything else over the holidays, you’re thrown off your schedule. You’ve got more guests and commotion in your house so, when you have something cooking on the stove and the doorbell rings, you get distracted and before you know it, your kitchen is on fire.”

Cooking fires peak from 5 to 8 p.m., and a little more than half are caused by oil, fat or grease igniting, according to the Fire Administration.

Allstate Insurance Co. says planning and precaution can help protect your home. The insurer recommends installing new batteries in smoke alarms and carbon monoxide detectors before the holidays, making sure that family members can locate and operate fire extinguishers, and testing all fire prevention devices to make sure they function properly.

Liberty Mutual suggests that you stay in the kitchen while the stove or oven are on, avoid cooking when you are tired, and set cooking timers. The company also recommends keeping anything that might catch on fire away from the stovetop, and keeping a lid, cookie sheet, baking soda and oven mitt nearby to safely extinguish small grease fires.

“During the holidays, people who don’t get to cook normally do cook because they have family over. One of my clients had a bad kitchen fire start because she was making fried dough on Christmas morning, got distracted with opening presents, forgot she had the hot oil on the stove and burnt down her house,” recalls Raab.

“Alcohol is a factor in a lot of [problems] over the holidays because people who don’t normally drink do drink over the holidays, which hinders their normal decision-making ability, leading to risky behaviors such as forgetting to turn their stove off,” says Raab. “Alcohol and cooking can be a bad combination and can certainly raise your risk for a number of things, including fires.”

Home insurance to the rescue

If you have a kitchen fire you should know how to correctly submit a home insurance claim. Damage from fire is covered by home insurance.

Raab suggests taking as many pictures of the damaged property as possible, always telling the insurance company the truth about how the fire started and doing whatever it takes to make the environment safe for your family.

“Also, make sure that your family is somewhere where they have breathable accommodations. Many insurance policies will pay for temporary living expenses such as hotel stays,” he says.

Raab also advises consumers to consider getting an expert such as a contractor, engineer or public adjuster to help obtain an estimate for repairing the damage before filing the claim so that you know the true cost before filing.

“Things add up really quickly beyond your deductible, so you may want to get a good idea from a trusted source of what the cost is going to be, labor and all. For something small that will cost less than your deductible to repair, you might be better off just eating the cost, but don’t do that without first evaluating it fully because there may be damage you’re not aware of,” says Raab.