He’ll break your heart — and your car insurance rates

If you’re a female driver thinking of adding your boyfriend to your auto insurance policy, you may want to reconsider. If he doesn’t break your heart, there’s a good chance he’ll do serious damage to your car insurance rates.

Gender is one of the factors auto insurance companies use to predict claims costs and calculate pricing. While men and women aren’t truly from different planets, as some pop psychologists suggest, there is widespread agreement that they behave differently on the road. Because males are prone to taking chances, they generally have more citations and accidents. That results in higher car insurance quotes for males, especially males in their 20s. 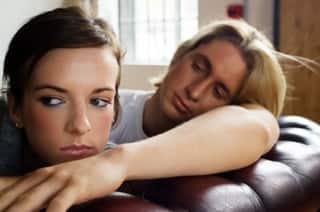 On the other hand, a guy can potentially save on insurance by adding a girlfriend.

Ladies may be able to avoid some stress in the relationship simply by asking their significant other to maintain his own policy.

“When you are thinking of adding someone to an insurance policy, think with your head and not with your heart,” advises Dave Snyder, vice president and associate general counsel for the American Insurance Association.

Edmunds.com recently reported that men are twice as likely as women to be intoxicated at the time of a fatal collision. Such risky driving behavior may simply be the nature of the male beast, says Russ Rader, spokesperson for the Insurance Institute for Highway Safety (IIHS). “It just boils down to testosterone.”

According to IIHS, far more men than women were killed in U.S. motor vehicle accidents in 2009. The death tally was 23,726 for men compared to 10,070 women. That’s partly because men typically drive more miles than women, exposing themselves to a greater chance of having a fatal crash. However, men also take more chances and speed more often, the institute reports. The resulting claims costs come into play when men request auto insurance quotes.

Rader notes that men are also more likely to not wear seatbelts.

Some women mistakenly think that it’s necessary to add their boyfriend to their policy once they share the same home, says Mark Carrasquillo, an insurance broker in Manhattan. He counsels women to find out whether merging policies will result in a higher price. “I say, ‘Let me check his driving record first.’ You can keep policies separate. When you add a flawed driving record, the premium is going to go up.”

Among young couples, any multicar discount gained for adding a boyfriend to a policy usually is more than offset by an increase to cover the extra risk posed by the male driver, says Derek Ross, an insurance agent in Woodland Hills, Calif.

Ross explains that price differences vary “from insurance carrier to insurance carrier and there are some policies that state that the carrier must be notified if anyone else lives in your household.” In such cases, women must decide whether to have their boyfriend specifically excluded from their policy, he says.

As males move beyond their mid-20s, the risk posed by male drivers diminishes, says Peter Moraga, spokesperson for the Insurance Information Network of California. For example, males will generally get lower rates when they reach age 25 (but still not better than 25-year-old women).

You can’t save money on car insurance quotes simply by choosing an older boyfriend, however. They’re still generally going to get rate quotes higher than women of the same age and comparable driving records.

10 horrible decisions that will mess up your car insurance
New driver insurance grace period: What you need to know
My wife is a licensed driver but hasn’t driven in over 10 years and doesn’t want to in the future. Do I have to keep her on my household car insurance policy?
I let my 18-year-old niece, who doesn't live with me, drive my car occasionally. Is she covered if she has an accident?
See more >