How to avoid problems with salvaged vehicles

Millions of vehicles suffer flood damage and become victims of accidents and thefts each year. If the damage is severe enough, car insurance companies will declare them “totaled” – when the repair costs are equal to 75 percent to 90 percent of the vehicle’s value. Most of these cars are sent to salvage yards or auctions for buyers who want to disassemble them for parts. 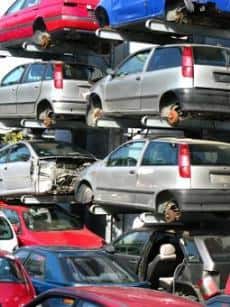 But many thousands of these wrecks also find their way back into the used-car market, often with clean titles that give no hint that their electrical system was ruined by water or that their frame was bent in a rollover accident. They have been repaired just enough to make you think they are reliable used vehicles.

“A lot of totaled vehicles are rebuilt and re-enter the market with clean titles because the states all have different tracking systems and each state has different salvage and disclosure laws,” says Bailey Wood, spokesperson for the National Automobile Dealers Association. “Consumers don’t want these cars, and dealers don’t want them on their lots.”

Wood says auto dealers want the 18-year-old NMVTIS database improved so that it gives the public faster and more complete access to data on totaled vehicles. They want car insurance companies to electronically disclose the VINs of all totaled vehicles to vehicle-history providers such as CarFax and AutoCheck.

That electronic process would take no more than seven days, Wood says — far faster than the current system, which takes up to 90 days for a vehicle to make it through the paper-oriented auction and DMV-updating process. It’s during that period when cars can be quickly repaired and retitled to appear as though they are sound.

How to avoid a rolling wreck

Although most car insurance companies require auto wreckers to dispose of totaled vehicles, Loretta Worters of the Insurance Information Institute says you can still purchase a salvaged vehicle without knowing it.

Vehicles that were flooded are by far the worst type of salvage vehicle you could buy, Worters says, because their electrical systems have probably been destroyed.

She says there are certain red flags that can help you determine if a vehicle is a salvage car that has been repaired and unscrupulously put back on the market as a clean-titled vehicle: They include:

“To avoid inadvertently purchasing a flood-damaged car, it is important that consumers only buy a used car from a reputable dealer, have a certified mechanic look for flood damage and check the car’s VIN number,” Worters says.

Although some wrecks won’t show up on online title-checking services, Worters recommends that if you’re buying a used car you should check the vehicle’s history at one of these Web sites:

Going down the wrong road

Some drivers will nevertheless be tempted to knowingly purchase a vehicle with a “salvage title” because of the cheap price. If you buy such a vehicle and have it repaired so you can drive it, you may find that many car insurance companies will require you provide a DMV inspection certificate or a “garage report” from a mechanic stating that the car is roadworthy.

But be forewarned: Worters says salvage cars are no longer roadworthy and should be avoided at all costs. Some car insurance companies will not write collision or comprehensive coverage on a salvage or flood-damaged vehicle, but they may sell you liability coverage, she says.

What happens if someone else crashes your car
Can you switch car insurance after an accident?
What to do after a car accident that's not your fault
You crashed a what?!
Are you entitled to brand-name car repair parts? Know your rights
Why your insurance company has to pay for your illegal acts
How much will my insurance go up after an accident?
What to do after a car accident
Best and worst vehicles for preventing passenger injuries
"Diminished value" car insurance claims get the wrecking ball
It's not your fault that you're to blame
How to make a car insurance claim for a hit-and-run accident
In over your head: What happens if accident damage exceeds your car insurance?
Auto direct repair programs reduce headaches
See more >