Insurance for your drone

Google Trends lists drones as one of its top four items when people type in “I want to buy.” With drones starting at less than $300, it’s reasonable that Santa could deliver one.

Anywhere you look these days there’s a drone. A “60 Minutes“ piece shows a prospector using a drone to find gold in the Yukon. Wisconsin ice fishermen have their beer supplied by drones. Domino’s plans to have drones deliver pizzas, and Amazon is testing them for deliveries. 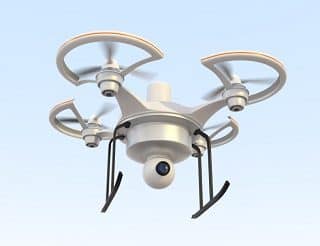 Children and hobbyists have been flying model planes — the original drones — since the earliest days of aviation. What has changed in the last 10 years is the technology, says Richard Hanson, the head of government and regulatory affairs for the Academy of Model Aeronautics.

Now there are rotors that allow drones to hover instead of fly and fuel cells that provide power instead of or in addition to noisy gas motors. But most importantly today’s drones include a Global Positioning System. The GPS allows a user to fly his or her drone far beyond the traditional line of sight and much higher into the sky than current drone restrictions allow, which is what most businesses — and amateurs — really want.

“The technology is the same whether it’s a small inexpensive aircraft or a military drone,” says Hanson. “The difference is intent and the threat to public safety.”

And that threat has stalled drone regulation by the Federal Aviation Administration (FAA) to the point where American businesses, and in particular drone manufacturers, are up in arms. “America can’t lead the world in innovation if the FAA keeps dragging its feet,” warns a Washington Post opinion piece by Larry Downes of the Georgetown Center for Business and Public Policy.

Drones are currently legal if they are for personal use. Anyone can fly a drone within his or her field of vision and at a height of no more than 400 feet above ground, provided they are not in restricted areas like airports or government installations, such as the White House.

The FAA has started providing very limited exceptions for commercial drone use. Exceptions have been granted for the video and movie industry, real estate photography, agricultural monitoring and aerial surveying with more exception requests being filed regularly.

Recent regulations have gone into effect requiring the registration of all unmanned aircraft systems, referred to as UAS or drones, that fit the weight specifications. That means whether you are a hobbyist, a drone engineer, or a child in the backyard, you will be required to complete a $5 registration of your drone. You will also be required to have your FAA registration certificate in your possession when operating your drone.

According to Faa.gov, registration is required prior to operation outdoors. If the owner of the drone is less than 13 years of age, then a person 13 or older is required to register the drone. Registration renewal will be required every three years and costs $5.

Registration is currently only required for U.S. citizens and permanent residents; for non-citizens, drone registration serves only as a certificate of ownership, not registration.

It’s certainly worth noting the penalty for failure to register: the FAA may assess civil penalties of up to $27,500. Criminal penalties include fines of up to $250,000 and/or imprisonment for up to three years.

Personal drones are surprisingly easy to insure, provided you only want to use it for recreational purposes. Many home insurance policies cover personal property and, while there’s an exclusion for aircraft, “model or hobby aircraft not designed to fly people or cargo” are included in the policy, according to a typical homeowners policy from New Jersey Manufacturers Insurance Co.

“Look at the ‘contents coverage’ section of your policy to see if it is covered if lost, stolen or damaged,” says Christie Alderman, vice president of Chubb Personal Insurance.

Since liability for an accident caused by your drone is a bigger concern, it might make sense to join the Academy of Model Aeronautics. A regular membership is $58 a year, according to its Claims Secretary Lisa Johnson, and one of the benefits of membership is $2.5 million of general liability protection in case your drone crashes into a car window or hits someone.

Insurance through the academy is in excess to any other coverage you have, such as homeowners insurance — meaning it will pay out only after other insurance is exhausted.

You could also buy drone insurance through individual liability coverage from a private insurance agent, says Ilona Maine, the academy’s safety and benefits manager, but it would be more expensive.

Liability coverage for physical damage isn’t the only kind of coverage you might need. Many experts foresee a rise in invasion of privacy claims, which falls under personal injury. If your drone accidentally captures images of a neighbor, and that neighbor feels you have violated his or her privacy, you could be sued.

An umbrella policy or the personal injury section of homeowners insurance could protect you. However, if the act was intentional – say, spying on a sunbathing neighbor and posting those photos on Facebook – you’ll be on your own. Insurance companies will not cover you for intentional acts, and that’s up to the insurance company to decide.

Most major insurance companies are waiting for the FAA to make the first move before selling policies that would cover the business use of drones. “They [business drones] are still illegal, with a few exceptions,” says spokesperson Angie Rinock of State Farm, the nation’s largest property-casualty insurer.

Another major hurdle for insurers is that — unlike cars and commercial aircraft — there’s no claims experience to decide the rates.

But when the FAA does legalize drones, insurers will be right there with specific policies and endorsements to current policies, predicts spokesperson Loretta Worters of the Insurance Information Institute, which represents the property-casualty industry. “Carriers will want to know the drone’s function and intent, its takeoff and landing location, if it will fly over a populated area, and its altitude.”

Worters predicts that the leaders in this area will likely include the 21 insurers that already write liability policies for aircraft products. “This not only has the potential for growth, but is an exciting time for us,” she says.

Insurance companies could also be some of the biggest users of drones. Michael Toscano, president of the Association for Unmanned Vehicle Systems International, points out that drones could fly into disaster areas like Japan’s nuclear spill and assess the damage well before an insurance agent would get there. Four insurers, State Farm, AIG, Erie, and USAA, which covers military and ex-military personnel, have already been approved for testing.

Insurers could also use drones to evaluate properties that potential customers want to cover, or check out a fender-bender to see if the claimant is telling the truth. As for invading your personal space, Toscano has an answer. “Street cameras and cell phones already track your every move,” he says. “That drone has already flown.”